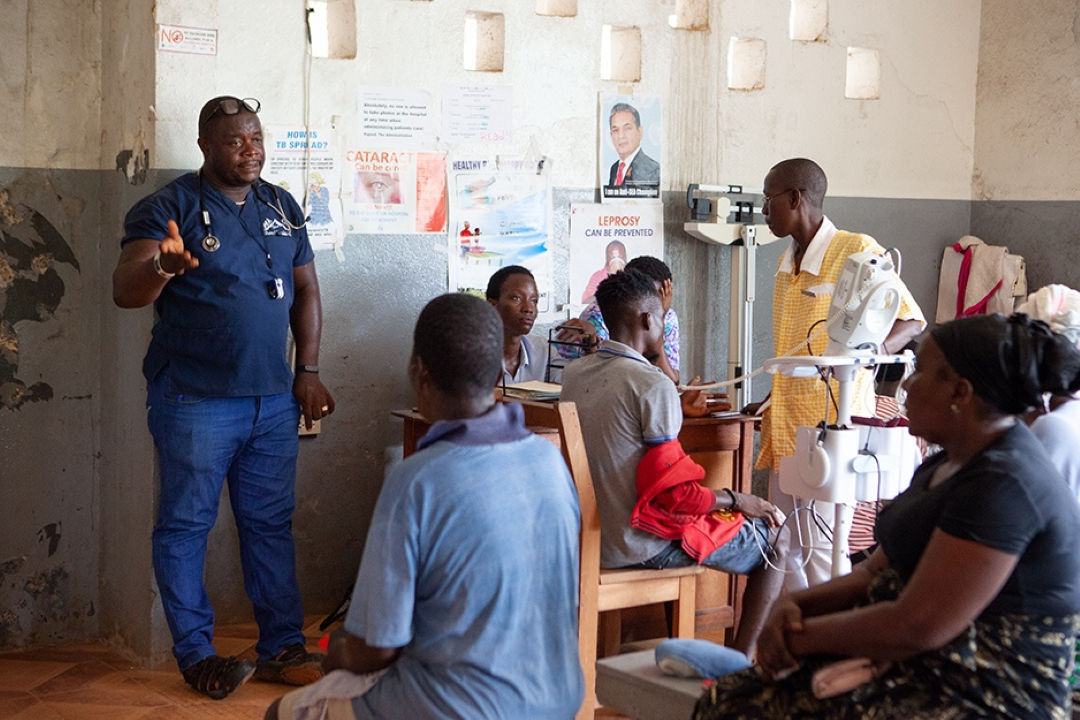 Most mornings on his way to work in Harper, Liberia, Dr. Jacquelin Pierre says he is met with a beautiful sight. As he climbs the hill above the ocean, sunlight glinting off the waves, a group of runners wearing brightly coloured workout gear greets him.

“Hey Doc,” they yell out, smiling and catching their breath. “We’re doing physical exercise,” they say. Sometimes they call out numbers. “95!” they call out. Or, “100!,” high fiving him as they run on.

Pierre is PIH’s noncommunicable diseases (NCD) program lead in Liberia, and among the runners are some of his diabetic patients. The numbers they yell out are their latest blood sugar readings, and they bring him joy.

When Pierre arrived in Liberia’s Maryland County 15 months ago, many of the patients he saw at J.J. Dossen Hospital and Pleebo Health Center presented with both hypertension and sky-high blood sugar. Most didn’t know what was wrong. Some even had blood sugar readings of more than 500—a life-threatening level that is considered a medical emergency.

Complications from uncontrolled diabetes can quickly lead to heart disease, nerve damage, skin conditions, and damage to sight and hearing, particularly in Liberia, where awareness of diabetes is limited. “Sometimes you cannot imagine how a patient can live with such high blood sugar for a long time,” said Pierre.

Liberia still lacks exact data on the prevalence of diabetes, but the rate has more than doubled across sub-Saharan Africa since 1980, triggered by sedentary lifestyle changes like greater access to cars and fast food. And diabetes care across the continent can be expensive. In parts of West Africa without access to free health care; the bill for glucose strips, a month’s supply of insulin, and a blood sugar monitor can easily total $300 USD—a significant barrier to access for the vast majority of Liberians, 84 percent of whom lives below the poverty line of $1.25 USD per day.

PIH has been partnering with Liberia’s Ministry of Health since 2014 to overhaul access to diabetes care and improve patient outcomes. The PIH approach hinges on a combination of building capacity at health facilities in conjunction with health education, access to medication, lifestyle changes, and support groups. Diagnosis and treatment is free of charge at Ministry of Health sites supported by PIH, such as at J.J. Dossen Hospital and Pleebo Health Center in Harper, where Pierre sees patients. As of late September, he said, there were already 1,166 patients enrolled in the NCD program.

“We all know that if we want to do something sustainable, the first thing to do is build capacity. We’re training young doctors and nurses in NCDs,” said Pierre, who previously rolled out PIH’s NCD program in Haiti in partnership with the ministry of health that saw an overall drop in mortality from complications from 27 percent to 6 percent. “That’s the same thing that my team and I at PIH, together with the ministry of health, are doing in Liberia.”

A patient leader for diabetes

The PIH team includes not only clinicians but patient leaders. Among them is Alexander Quaye, an associate professor of economics at Harper’s Tubman University, who was diagnosed with type 2 diabetes a year ago. Through a combination of diet, exercise, and medication, Quaye has seen his blood sugar level drop fivefold, from 541 to 111.

His story began in November 2018, when he was escorting another sick colleague to the hospital. But when he arrived, Dr. George Methodius, Maryland’s chief medical officer, took one look at Quaye and insisted he have his blood sugar level tested. He hadn’t been experiencing any symptoms, although with hindsight he remembers feeling tired.

“The nurse who did my sugar test was afraid. It was 541. The hospital gave me a bed and four IV lines,” said Quaye, who was more shocked than anyone. He had simply been expecting to drop off his colleague and head back to work.

At the NCD clinic the next morning, Pierre and the clinical team met with Quaye to discuss some ways he could adapt his diet to improve his health, integrating more fruits and vegetables into his daily meals. It seemed like Pierre was suggesting the impossible. Southeastern Liberia may be home to fertile land watered by the long rainy season, but few fruits or vegetables are farmed or readily available there.

“But doctor,” said Quaye, “how can I do that? Here in Harper we have nothing. It’s only rice every day. It seems like for me, diabetes is a very difficult disease to deal with, and I’m going to die.”

Together they came up with a plan to improve his diet. “It’s possible for you to get better, and we’ll take care of your disease together—not only us as health care providers, but with you,” Pierre assured him.

First up was breakfast. They replaced visits to cookshops—the popular roadside coffee shops that serve fried eggs and hot sugary donuts—with oatmeal and fresh milk. They added avocados, known in Liberia as butter pears, along with other fresh fruits and vegetables, such as seasonal mangos and juicy oranges. They adapted recipes to include less sugar, salt, and palm oil, and they replaced rice with the Ghanaian staple kenkey, which is pounded from maize and is widely available in the southeast.

Now, Quaye hasn’t eaten rice for a year—an astonishing feat in a region where most people rely on rice and sauce several times a day. He regularly goes for long walks in the mornings, even in the rainy season, and encourages others in his community to get their blood sugar level tested, including his mother, who was also subsequently diagnosed with diabetes and learned to adapt the meals she cooks at home. He takes Metformin, a common medication for type 2 diabetes, twice daily, and he watches his blood sugar level like a hawk.

“It is incredible how he has made himself healthy with what is available to eat in Harper,” said Pierre, who also oversees regular cooking workshops and patient support groups for patients diagnosed with diabetes in Harper. There, patients can also trade tips with others suffering from the same condition.

“We’re doing integrative social medicine based on patient education,” Pierre said. “We do home visits to get an idea about patients’ economic status, how they live, and we take the time to educate them about how to use the minimum they have to adjust their diet to the disease they suffer from. That’s what we did for Alexander, it’s what we’re doing for all NCD patients, and it works.”

The approach is impacting not only patients but also health workers, many of whom had had little access to information about diabetes until recently.

Cyrus Randolph, a physician’s assistant, has been working with PIH and the ministry of health on the NCD program for the past two years. After overseeing the training of nurses and physician’s assistants at Pleebo Health Center, also in Maryland, he has seen a drop in the number of patients suffering from complications.

Recently, he was thanked by the parents of one young patient who had no idea their daughter was sick. They didn’t realize that the reason she wasn’t doing well at school wasn’t an academic one. As it turned out, she had been going into diabetic ketoacidosis—a serious condition that requires immediate supportive care, including fluids and insulin.

Since she was diagnosed with type 1 diabetes, she is suddenly excelling at school. “Her blood sugar is well controlled and she’s passing her exams,” Randolph said. “It’s wonderful to be able to help more patients like her.”

“Until recently, some health workers in Liberia had no idea about diabetes,” he said. “Now we have established protocols and are building a system for providing them support and hope.”

See how PIH Rwnada is supporting families suffering from diabetes and malnutrition through an innovative agriculture program.