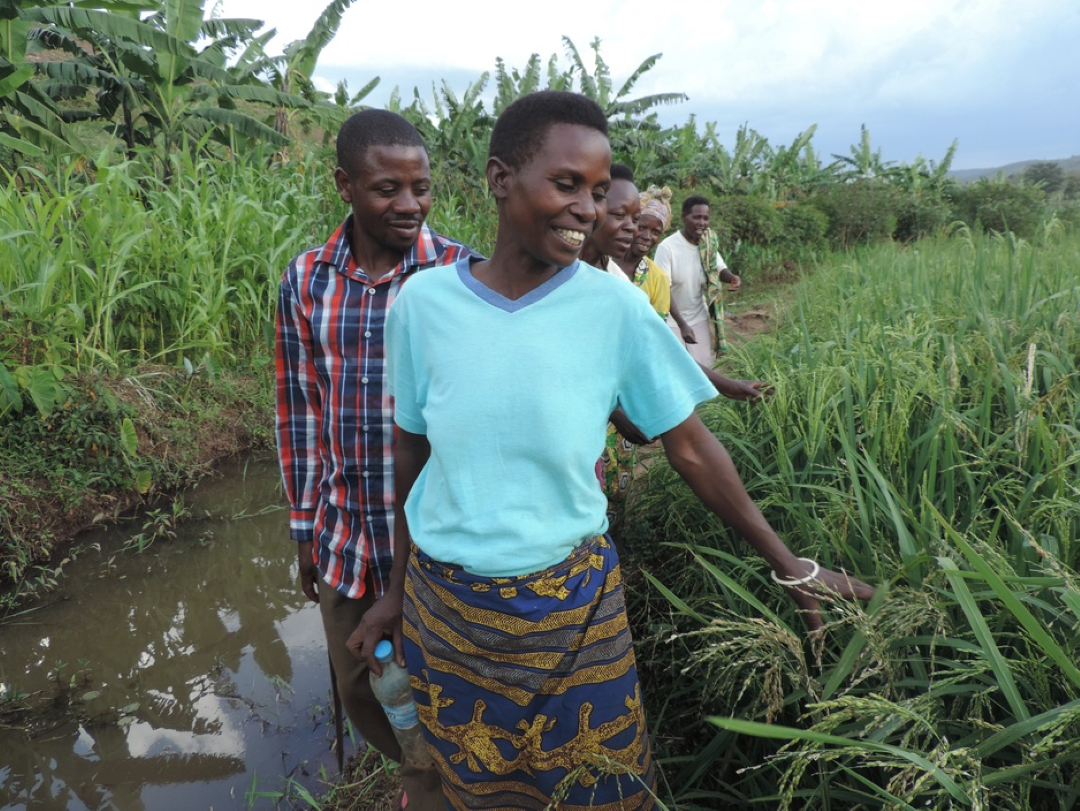 The hardest part about growing rice in a lush river valley in southeastern Rwanda, a dedicated group of farmers says, is “keeping the beds”—in other words, frequently yelling and waving to scare away flocks of hungry birds that descend on the paddies.

Farmers’ piercing calls create a steady background noise along this rural stretch of the Kadiridimba River, where rice paddies form a checkerboard across the flooded lowlands and—scavenging birds or not—an innovative agriculture program is changing the lives of 18 families with children affected by malnutrition.

The Kadiridimba is a major source of water for Kayonza District, and a major thoroughfare for agriculture in Rwinkwavu, a region in Kayonza where Partners In Health supports Rwinkwavu Hospital, strengthens the health system and provides health services in numerous communities. Last year, staff with PIH’s livelihood program successfully worked with the local government to dedicate one hectare of river-fed land—about 2 ½ acres—for a rice farming program. Parents of malnourished or diabetic children now work the one-hectare paddy and use the harvests for food, income and, potentially, growth of a small business.

Partners In Health has worked in Rwanda since 2005, and is known locally as Inshuti Mu Buzima. Kayonza is one of three districts in which PIH works, and across all of them, livelihood programs—formally called the Program on Social and Economic Rights, or POSER—are a key part of caring for people’s entire health needs, beyond clinical care.

Christian Mazimpaka, PIH’s clinical director for Kayonza District, said many people who receive health care and screenings from PIH are then connected with POSER programs because of malnutrition.

“At the hospital they get food, but when they go home, it is a problem,” he said. “These programs are to make sure after they are discharged, they can get food, and they are not coming back to the hospital.”

Such as growing rice to produce additional food for their children.

Clementine Nyirashyirambere was one of five parents who sat on a thick bed of straw in their shared paddy on a sunny afternoon earlier this year, and talked about the program. She is a mother of six children, including two enrolled in PIH’s malnutrition program. She said PIH has provided health checkups and care for her family, direct food support along with the rice farming effort, additional training on how to grow better vegetables at home, and transportation for her children to visit Rwinkwavu Hospital.

And with harvests under their belts, she and her co-workers already were talking about expanding their sales.

The parents’ success has come with a lot of dedication. They work in the rice paddy from 7 to 11 a.m. every weekday, learning daily lessons in the labour-intensive process. Beds of rice have to be moved as they grow, transplanted from one soggy patch to another over about three months, until they mature. Beds of rice that are ready for harvest are taller than waist-high. Empty beds that recently have been harvested are covered by thick layers of straw, heavy enough to sit on and walk across, until the next planting.

Florenti Rukiriza, a PIH agriculture facilitator and a father of four himself, has been guiding the new farmers along the way.

Rukiriza, 52, said he’s been farming rice “since before the genocide.” That’s a common marker of time in Rwanda, where the 1994 genocide against the Tutsis led to the deaths of 1 million people—nearly 20 percent of the country’s population at the time—and displaced millions more.

Community empowerment and building health from the ground up, through programs such as communal rice farming, are a crucial part of Rwanda’s national revival in the 25 years since.

Rukiriza said before the program began, they surveyed community members to assess needs for seeds, land, and supplies—such as an irrigation pump for the Kadiridimba, which is heavily farmed and flows sluggishly through the valley.

After the first planting in August 2018, the group now is about to reap its fifth harvest, in late November. Members collected more than 2,100 kilograms of rice across four harvests. Each harvest bore about five sacks, each weighing 100 kilograms. Cyiza said each sack sold for about 30,000 Rwandan francs, or more than $42 CAD.

Altogether, that amounts to about 630,000 Rwandan francs, or $895 CAD. Divided among the 18 families in the program, that means each family gained 35,000 francs, about $50 CAD, over the year. In rural areas such as Rwinkwavu, that’s more than enough to feed a family of five for a month.

Mazimpaka, the clinical director for Kayonza District, said those gains are translating directly to greater food security for people in PIH’s malnutrition programs across Rwanda. The rice farming program is part of a larger effort called All Mothers and Children Count, he said, funded by a $3-million CAD, four-year grant from Global Affairs Canada in partnership with Primate’s World Relief and Development Fund (PWRDF).

Mazimpaka is the project manager for All Mothers and Children Count, which he said includes a variety of maternal and child health initiatives, POSER programs, and more.

“When we started this project, we did a survey,” said Mazimpaka, “All the beneficiaries reported they only had food security for five months out of the year.”

That 2016 survey spanned 2,400 households, across the three districts—Kayonza and Kirehe in the southeast, Burera in the north—in which PIH works in Rwanda.

Since that time, Mazimpaka said, average food security for families surveyed has grown to eight months out of the year, rather than five.

That’s only a start, of course. But for parents including Cristine Mukabarisa, who has children in the Rwinkwavu malnutrition program and has been growing rice alongside Nyirashyirambere and others, the impacts have been very real.

She gave a simple description of how her children have been doing since the group began harvesting.

“Abana baraho,” she said in Kinyarwanda, as Cyiza translated. “(My) children are so good.”

See how in Malawi, PIH’s POSER program is using goats, gardens and business training to empower an HIV patient to care for herself and her family.