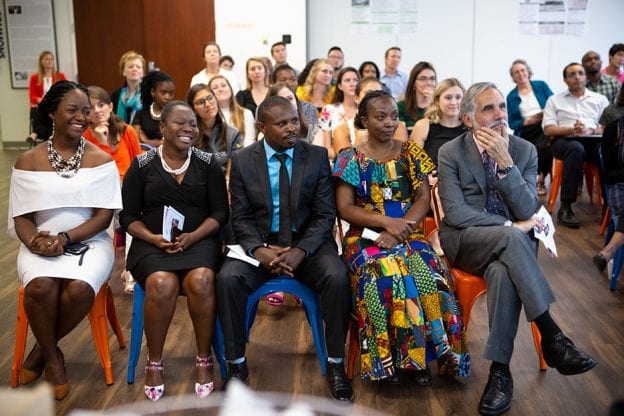 Emmanuel Dushimimana said doctors and staff in northern Rwanda were finding it so difficult to keep children with cancer in follow-up care, and to maintain vital connections, that he knew a solution had to be found.

“We sat down and said, ‘What can we do? How can we educate caregivers?’” recalled Dushimimana, director of nursing and midwifery at Butaro District Hospital.

His answer was a training program that began in September 2017, teaching nine nurses new and better ways to inform children and their families about the effects of chemotherapy, long-term care, and more. With new informational booklets that provided resources and emphasized the importance of maintaining follow-up treatment, Dushimimana said, he began to see more children staying involved with long-term care through the Butaro Cancer Center of Excellence, part of the Partners In Health-supported medical campus in the rural, hilly region near the country’s northern border with Uganda.

“We have seen that the program is very successful,” Dushimimana said.

His was one of four presentations displayed June 14 at the PIH office in Boston, as part of a graduation ceremony for the first PIH Nightingale Fellows. The yearlong fellowship program began in May 2017 and included online instruction and webinars, monthly conference calls, mentorship from veteran nursing leaders, and individual leadership projects, such as Dushimimana’s training and outreach program.

The PIH Nightingale Fellowship was designed to provide support and training for nurses in senior or executive leadership positions, and ultimately to improve patient care. The program focuses on areas including health information systems, evaluation and supervision, quality assurance, resource management, and more.

The graduation drew a crowd of colleagues, friends, and supporters. Cory McMahon, PIH director of nursing, began the ceremony by pointing out that the fellows completed the program on top of their full-time jobs providing care in challenging circumstances.

“These fellows here are really paving the way for global nursing leadership,” McMahon said, before addressing the graduates directly. “Every day I’m inspired by each and every one of you.”

One of the fellows completed the program while also adding to her family. Cadet gave birth to her daughter, Meghan, in November—meaning she joined many Nightingale meetings via Skype or phone. Cadet, who also is a flight nurse on the Haiti Air Ambulance team, focused her leadership project on standardizing “code carts”—the rolling, multi-drawered containers of medical supplies and information—used in the ICU at University Hospital.

Cadet said improving code carts proved so beneficial, often in unexpected ways, that her team plans to replicate the model elsewhere in the hospital.

Angeline Charles talks about her leadership project with Major Gifts Coordinator Ancito Etienne and other colleagues at PIH’s Boston office in June.

Viola Karanja talks about her leadership project, before the graduation ceremony for the first group of PIH Nightingale Fellows.

Graciela Cadet drew an attentive crowd of colleagues while presenting her leadership project.

Charles’ project had a similar goal of improving efficiencies at University Hospital—specifically, in her case, with the operating room.

“When the operating room was opened, there was no schedule in place,” Charles said.

That meant the operating room could get started late, which left patients unsure when their procedure would occur and be left waiting, in a facility that sees 16-20 operations a day. The facility also was seeing an unacceptably high number of cancellations—a number that now is dropping significantly, thanks to Charles’ scheduling project.

“The fellowship has helped me learn how to make new changes that improve our systems,” Charles said.

Karanja focused her project on empowering and expanding roles for nurse supervisors at PIH sites in Liberia. The need was so great, she said, that one of the biggest lessons was to scale back the project and break it up into phases.

“I think we got too excited—we did a lot of things at the same time,” she said. “This project will continue—it’s not going to end.”

Karanja said one of the most beneficial things about her project was seeing her team take proactive roles in improving nursing systems at the PIH-supported J.J. Dossen Hospital in Liberia.

“Everybody had buy-in,” she said.

Dr. Paul Farmer, PIH co-founder and chief strategist, said all four graduates were leaders before they began the fellowship. He praised their ability, and the ability of nurses everywhere, to help whoever walks through their doors, to listen, and to ensure that everyone has a voice in the provision of medical care.

“I just want to applaud you for being willing to use that voice for others. Particularly patients who are facing disease and poverty. Injury and poverty. War and poverty,” Farmer said. “I’m always going to be in your fan club.”

That fan club was strongly represented at the graduation, which included a video montage of fellows’ colleagues and family members, congratulating them on the achievement. A surprise appearance in the video by Dushimimana’s two sons—Nshuti, 5, and Munezero, 3—made him tear up with happiness.

“We couldn’t have chosen a better group to be our inaugural leaders,” Davis said. “The future is so bright for all of us because of you and your commitment.”