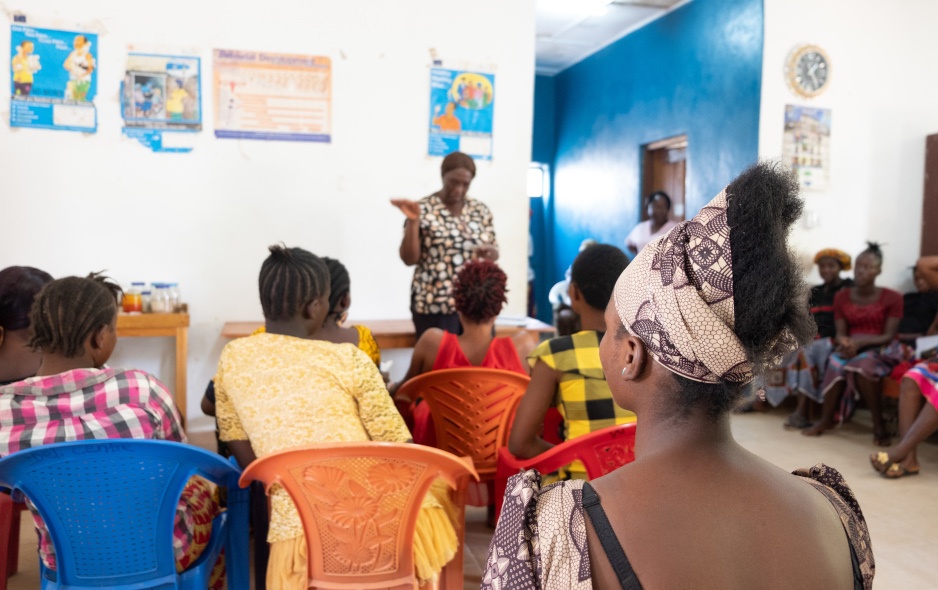 This month’s rollout of an electronic medical records system at a Partners In Health clinic in Sierra Leone already is having transformative impacts for patients, staff, and care.

Co-developed by PIH in 2004, OpenMRS is used not only by more than 100 PIH-supported facilities around the world, but also by numerous governments and partner organizations. Wellbody is the latest health facility to join hospitals and clinics in more than 60 countries using OpenMRS, adding to the 8.6 million patients worldwide who are receiving care via the system.

Previously when patients arrived at Wellbody, they were registered at the front desk and handed a manila folder that held their patient file, with their unique identification number stuck to the front. Patients took their file with them to clinical appointments, and at the end of their visit handed it back to staff for storage in the vast, paper-filled records room.

‘It changes the entire workflow’

OpenMRS revamps this model by storing records digitally. Now, patients receive a plastic card with their number and a bar code, which clinicians scan to get a clear, quick view of medical histories. No longer printed on paper, these histories are now safe from possible destruction in a fire or flood.

“The EMR is not just a reporting system, it changes the entire workflow of the clinic because it is central to operations,” says Khaled Bediri, eHealth manager for PIH Sierra Leone. “Seven pieces of information are stored in the system, (ranging) from triage, registration, outpatient department, laboratory, pharmacy, and maternity, to the prenatal clinic.”

A global community of doctors, software developers, academics, and tech enthusiasts, led by PIH, developed OpenMRS to be open source, meaning anyone can use the application for free and modify the code to meet their needs. The eHealth team in Sierra Leone, therefore, was able to customize the system specifically for Wellbody, and can continue to do so as clinicians and patients expand their use.

The rollout of OpenMRS at Wellbody is a huge step for the continual improvement of care, and in establishing the clinic as a national model for effectively implementing electronic medical record systems.

A woman named Abi Dauda, who came to Wellbody in early February for a maternal health checkup, shows how the electronic system is improving patients’ experience and care at the clinic.

Abi Dauda, 20, is pregnant with her first child. When she arrived at Wellbody for her appointment, she registered with Esther Ngaujah at the front desk.

A machine produced Abi’s identification card – a small but durable manifestation of how OpenMRS links the individual to the clinic. After receiving her plastic ID card, Abi headed over to the prenatal care area.

During Abi’s appointment, Sister Isata Dumbuya, head of reproductive, maternal, neonatal, and child health, pulled her registration details up on the screen. Isata made an assessment of Abi’s vital signs and captured the information in OpenMRS. Abi shared with Isata that she is concerned because, though 12 weeks pregnant, she is still bleeding each month. This information—also entered into the system—prompted Isata to refer her for laboratory testing and a follow-up appointment later in the week.

With OpenMRS, clinicians in every department at Wellbody are able to retrieve patient information and make accurate diagnoses and treatment plans. As time goes on, it will also allow for a deeper understanding of the profiles of the diseases the clinic is treating.

“Our reporting will become stronger,” Khaled says. “The team can export data more easily, providing better decision-making power across what will eventually become every PIH-supported facility in Sierra Leone.”

Staff can also more efficiently monitor patient movements by tracking patients like Abi as they are transferred and discharged.

“We anticipate the EMR system being able to provide an accurate picture of patient care status by centralizing all departmental data into a single database,” Khaled says. “Our objective is to improve the quality of care by helping clinicians to spend less time on paper-based admin and more time on patient care.”