The Bright Future of Emergency Medicine in Haiti 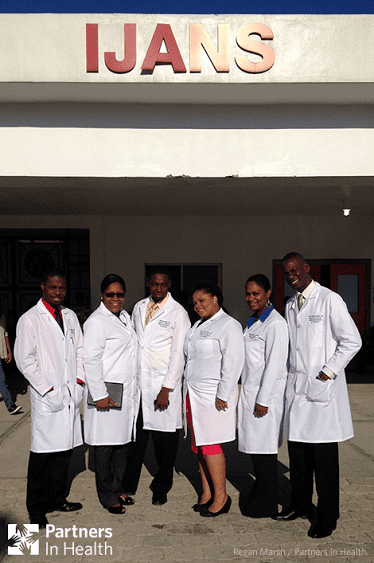 A groundbreaking gift from Slaight Family Foundation is allowing Partners In Health to shape the future of emergency medicine in Haiti.

This summer, six young doctors will complete their first year of the first-ever emergency medicine residency in Haiti’s history, taking place at University Hospital of Mirebalais. It’s part of PIH’s commitment to help strengthen the capacity of Haiti’s public health system to provide the highest quality care for patients, regardless of where they may live or their ability to pay.

Too often, specialized training programs are seen as not being priorities in resource-poor settings. Patients whose lives have been saved at University Hospital know otherwise – as do the young doctors and nurses who are receiving the mentoring and education they need to do their jobs well.

“We have a lot of Haitians, both teachers and students, who’ve gone to the U.S., Canada, or the Dominican Republic because they couldn’t find a place to get proper training,” says Pierre Paul, PIH’s program director of talent management and leadership development. “In my class in medical school in Haiti, more than 80 percent is now working in the U.S. or Canada. … That’s still true after the earthquake. That increased the magnitude and speed with which people are leaving.”

University Hospital’s residency program, Paul says, “has been a game-changer,” especially for young physicians contemplating whether they can find work in Haiti and practice with a standard of excellence.

The emergency medicine residency is one of six residency programs at University Hospital, also including pediatrics, internal medicine, general surgery, obstetrics and gynecology and nurse anesthesia. Forty-eight residents have completed more than 2,800 hours of training in their respective specialties over the past two years.

The transformative $1-million gift from Slaight Family Foundation to PIH Canada, along with gifts to six other Canadian NGOs working internationally, was announced at an event in Toronto on Feb. 19.

“We hope these gifts will benefit many people for years to come,” said Gary Slaight, “and that we inspire others to support humanitarianism efforts on a global scale.”