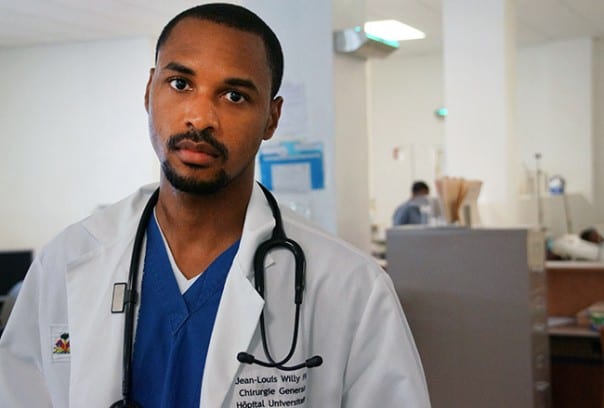 Dr. Jean-Louis Willy Fils is a medical resident in every sense of the word.

He’s training at University Hospital in Mirebalais to become a surgeon, living in a residence hall on the hospital campus and working about 80 hours every week.

Fils is one of 14 residents—University’s Hospital’s first class—who began their specialty training in surgery, pediatrics, or internal medicine last fall. In the United States, the federal government funds medical residencies through Medicare. In Haiti, such public sector funds are slim, and PIH/ZL pay for the cost of training residents through donations raised each year.

For most of the population in Haiti, a major obstacle to better health is the lack of qualified health professionals. As a national teaching hospital, University Hospital serves to train the next generation of physicians, nurses, and other health professionals in providing high-quality health care to the poor and disadvantaged. Zanmi Lasante, PIH’s sister organization in Haiti, is dedicated to the idea that the newly trained Haitian doctors and nurses will go on to serve as leaders and change agents in Haiti’s health system, ranging from treating patients in rural clinics to creating national policy at the Ministry of Health.

Fils says he doesn’t mind the long hours. This is what he dreamed of doing—becoming a surgeon of the highest caliber and serving patients.

“We’re so excited that we don’t really get tired,” Fils said. “Even on the weekend, even if we’re not on call, we’re there.”

Growing up in Cap-Haïtien

Fils grew up with his mother and older sister in Cap-Haïtien, a small city on the northern coast of Haiti. His father wasn’t involved, but Fils says he didn’t mind—he has only happy memories from his childhood.

Ever since I can remember I wanted to do medicine.
His mother worked in commerce, buying fashion jewelry in bulk from Santo Domingo, Dominican Republic, or Panama, and re-selling it in Cap-Haïtien. Eventually, she built her business to the point where she became the wholesale supplier, selling out of her home to other businesswomen.

With his mother’s support, Fils attended the best school in Cap-Haïtien. Still, he found the pedagogy wanting—as in many developing countries, it emphasized memorization. The influential Brazilian educator Paulo Freire described it as the “banking” model of education, where teachers deposit information into the otherwise empty minds of the students, without engaging their own knowledge and capacity for critical thinking.

Fils dreamed of going to medical school in Port-au-Prince, and imagined it would be different.

“Ever since I can remember I wanted to do medicine,” Fils said, then paused. “I don’t know whether my mom or I wanted it the most. Because as far I can remember, she always told me to do so.”

Moving to the capital

A consummate good student, Fils was accepted into the competitive state medical school in Port-au-Prince. In Haiti, high school students go straight into medical training, rather than completing an undergraduate degree first.

The professors were some of the best doctors in the country, and the students were bright. Fils was motivated to work hard, but he was disappointed that the instructional style was the familiar rote learning. And there weren’t a lot of resources available for students—the school’s labs, for example, weren’t equipped to conduct chemistry experiments.

The professors he liked the most were in surgery. During rotations at the state hospital in Port-au-Prince, he became surer that he wanted to be a surgeon. He thought it was one of the most challenging and rewarding things that a doctor can do—oftentimes making a big, immediate impact on the life of a patient.

To become a surgeon, he would need to complete a residency. In the United States, all practicing doctors must complete residencies, the hands-on portion of their training, supervised by seasoned medical professionals. But in Haiti, there are more graduating doctors than residency programs, so many go without this training. It’s a need University Hospital is helping to meet.

But first, Fils had to do a year of social service.

A difficult year of service

A year of service in a public health center is required for new doctors as a way to repay the cost of their government-subsidized education.

Fils decided to work in Ouanaminthe, a market town on the border with the Dominican Republic, with another doctor friend. What he saw at the community hospital discouraged him.

The doctors would come in late, around 11 a.m., because the medical records staff they depended on usually showed up late. But patients tended to come early in the day, so they had time to make the long journey home and still have work hours in the day. So they had to wait for hours to see the doctors.

Fils and his friend proposed to the medical leadership that the staff come in earlier. They also wanted to start a support group for patients with chronic diseases. But the leadership didn’t support their ideas for improvements.

“It made me skeptical. I don’t know if I will be able to change things,” Fils said. “What I really dream of is to improve access to and the quality of surgical care, especially in my hometown, where there is a real lack of good surgeons. But it’s not clear that I’ll be able to, because everything is so difficult to change.”

Life as a resident

At University Hospital, Fils has experienced a different teaching style. During rounds, he presents his patients’ cases to attending physicians—Haitian and foreign surgeons with decades of experience. They quiz him on the intricacies of the case, testing his knowledge, critical thinking, and communication with the patient. It’s just one of the stressful parts of being a surgeon.

My mom is so proud of me doing surgery in one of the biggest hospitals in Haiti.
His mentors encourage him to build relationships with patients and communicate well with them, for their understanding and his.

“Doing the surgery is only a part of the treatment,” Fils said. “It’s important to obtain the collaboration of the patient. You can’t do that without talking to them.”

He’s seen some cases that have affirmed his decision to become a surgeon. For example, he saw a 23-year-old man who came into the emergency department with gangrene, which would spread without surgery. In a fully equipped operating room with proper sterilization, working with experienced colleagues, Fils operated on the man to remove the dead tissue and replace it with healthy skin from another part of his body. It likely saved his life.

Fils will finish his first year of training this fall; he has four more years to go. He’s interested in pursuing further specialty training, to become one of Haiti’s few neurosurgeons, but for now he’s busy enough being a resident. When he can get away, he goes home to Cap-Haïtien to visit his mother.

“She’s really proud of me. She loves me so much. It was a big sacrifice to give us everything we needed growing up,” he said. “She put us in the best school she could find. She believed a lot in education, even though she hadn’t finished high school. That’s why she is so proud of me doing surgery in one of the biggest hospitals in Haiti.”