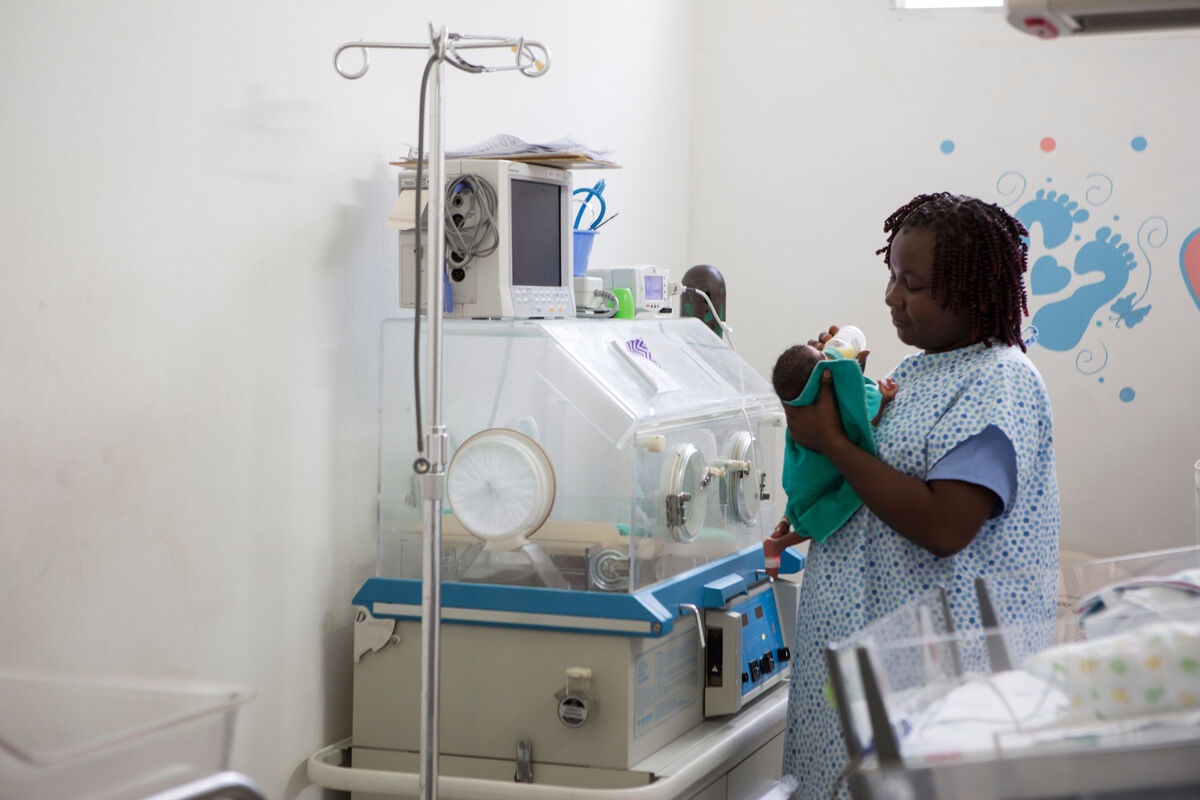 Nursing seen as core to their personal missions to lead, serve, and comfort others

It was a typical morning for Gretta Joseph, deputy chief nursing officer at University Hospital of Mirebalais in Haiti. She was still at home, going through her work email and getting a sense of her schedule for the day at the hospital, when she noticed the congratulatory message informing her she had been accepted to Partners In Health’s Global Nurse Executive Fellowship.

She let out a celebratory scream, alarming her husband who rushed into the room. Soon he was joining her celebration; he knew how much she had wanted this.

Joseph is among ten nurse leaders, from six countries, in the second cohort of the fellowship program, which launched in 2017. The program seeks to fill a void of support for nurses in senior or executive leadership roles, who are often placed in their positions without being provided the necessary tools, skills, or support to be successful.

Joseph and two other Haitian nurse leaders, Thamar Julmiste and Abdonie Laguerre, were selected for the fellowship and currently work at University Hospital in Mirebalais, a 350-bed teaching facility that was largely built in response to the 2010 earthquake.

All said, nursing is deeply rooted in their identity and they feel it is their personal missions to take care of their community. To them, nurses are the pillars of the health care system in Haiti. Through the fellowship, they hope to be a voice advocating for all nurses in Haitian society.

Nursing had been a surprise twist in Joseph’s career path. Originally, she had planned to become an agronomist. An avid nature lover, she participated as a teen and young adult in reforestation initiatives in her hometown of Cap-Haitian, a northern coastal city where the coconut trees she helped plant on the main boulevard are still standing today.

However, a short stay at the hospital when she was 18 helped Joseph discover nursing as her true calling. She went in for a biopsy and was terrified. “Thankfully my aunt worked as a nurse in this particular hospital and did everything to make me feel at ease,” she recalled.

Joseph assumed she was given preferential treatment because of her family connections. But she soon noticed that all the nurses were going above and beyond with other patients. “They were tirelessly going from patient to parent and cared for them with the same commitment and empathy I had experienced,” she said. “I was impressed by what I was seeing.”

Having found her path, Joseph shifted her focus from preparing to enter agronomy school and enrolled in a nursing program. She graduated in 2003 and went on to work with various hospitals and institutions, later specializing in anesthesiology. In 2009 she joined Zanmi Lasante, PIH’s sister organization in Haiti, and began working as a nurse anesthetist at Hôpital Saint Nicolas in the city of Saint-Marc. She eventually transitioned to University Hospital in 2013.

“As a Haitian nurse, I was thrilled to be working in an environment that promoted growth and improvement and encouraged teamwork amongst its staff,” Joseph said.

Working her way up, Joseph went on to become supervisor and head nurse of the Post Anesthesia Care Unit in 2015. She kept that position for the next five years, handling day-to-day operations in support of the operating room nurse manager and training new nurses in her specialty along the way. She finds sharing her knowledge with the next generation of young nurses one of the most rewarding experiences of her career.

In September 2020, Joseph was named deputy chief nursing officer at University Hospital, a role she understandably does not take lightly.  She believes the fellowship will help her improve her clinical and leadership skills and empower her to better serve her community.

Joseph, who is also the training manager of Zanmi Lasante’s Nursing Center of Excellence, said nursing is often devalued in Haiti, seen as the recourse for young women who don’t know what to do with their lives. She vehemently rejects this narrative.

“Through my role as deputy CNO and with the skills I will acquire from the fellowship,” said Joseph, “I want to change that perception and be a leading voice, advocating for better training for Haitian nurses.”

Thamar Julmiste specifically chose a career in nursing to care for the poorest in Haiti. As a recent graduate of nursing school, she was on the frontlines of the January 2010 earthquake response with other Haitian nurses as they mobilized to provide care, despite a desperate shortage of medical personnel and supplies.

Three years later, Julmiste visited University Hospital as part of a team conducting an assessment of health care service providers in Haiti and was impressed by the state-of-the-art facility and its culture of excellence and innovation. The hospital’s commitment to filling the void for people who had limited access to quality health care appealed to her personal convictions. She promised herself that, one day, she would work there.

She then applied for a nursing position at Zanmi Lasante’s Hôpital Sainte-Thérèse in Hinche, which was inaugurating a new neonatal wing in partnership with Ohio State University. For the next two years, Julmiste specialized in neonatology, eventually becoming the lead nurse of the department. Although she thrived in this role, she aspired to further her education and hone her skills.

An opportunity to work at University Hospital arose in 2017. She took an admission exam and joined the team as nurse educator at its Nursing Center of Excellence.

Hospital leadership subsequently appointed her as coordinator of Kay Manmito, a facility on the grounds of University dedicated to expectant mothers with high-risk pregnancies and new mothers of premature infants. Also under her leadership, more than 1,500 women and 900 babies were enrolled in the Journey to 9 program, which uses innovative actives such as group prenatal appointments and home visits to reduce maternal and child mortality.

Julmiste was promoted to University Hospital’s deputy chief nursing officer in August 2020. She was initially apprehensive to apply for the fellowship. Although she had the full support of hospital leadership, she felt it would be a challenge to undertake such an intensive training so soon after starting her new and demanding role. The encouragement of her mentor, Nurse Angeline Charles—a 2017 fellowship recipient, clinched her decision to apply.

“Miss Charles embodied the qualities of a real leader, and I aspired to be an agent of change like her,” Julmiste said.

Julmiste was overjoyed when she learned she had been accepted. She felt the knowledge and skills she would acquire would allow her to better serve her community and raise the bar for what she considers to be the world’s most noble profession.

“This fellowship will increase my leadership competencies and help me in achieving my goal of pursuing a doctorate degree in nursing,” she said. “I want to mentor future leaders in my institution and in my country.”

Nurse Abdonie Laguerre often wondered what it would be like to work at University Hospital. During the construction of the hospital, she regularly passed by the site on her way to work and marvelled at what promised to become one of the most advanced medical facilities in the Caribbean.

Laguerre had already been a nurse for seven years. She’d held leadership roles in several challenging projects in Haiti, including nurse leader in Atletik 2, a camp for displaced survivors of the 2010 earthquake and nurse supervisor in a sanitation project in Cité Soleil, one of the most impoverished neighbourhoods in the country.

A woman of faith, Laguerre sees nursing as her mission on earth: “What brings me joy in this job is to see that, at the end of each day, we have brought a little comfort to patients. Or seeing the gratitude in the eyes of a young mother who has been touched by a word or by a gesture. To bring some hope to someone else’s life.”

In 2013, she applied for the role of lead nurse of internal medicine at University Hospital. She adhered to its vision of providing quality care to the poorest people and believed her experience made her an asset to nursing staff. She also wished to expand her knowledge through training and by working alongside experts.

With that in mind, Laguerre collaborated with the care management team at the hospital to develop and implement care plans and improve processes. She still devoted her time to clinical work, helping with palliative care patients in the oncology department, reviewing patient files, listening to their complaints, checking on their improvement, explaining side effects, and even providing counselling.

When she was named University Hospital’s chief nursing officer in August 2020, Laguerre decided to apply for the fellowship along with her two colleagues. Despite the grueling schedule brought by her new role, as well as studying for a PhD, she realized the skills and knowledge she would gain would be invaluable and intended to take full advantage of the opportunity.

“This fellowship will help me grow as a manager and as a leader,” Laguerre said. “I am convinced it will open my intellectual horizons and provide me with tools I can apply to my work serving the community and even in my personal life.”

See how University Hospital of Mirebalais is preparing the next generation of doctors in Haiti.