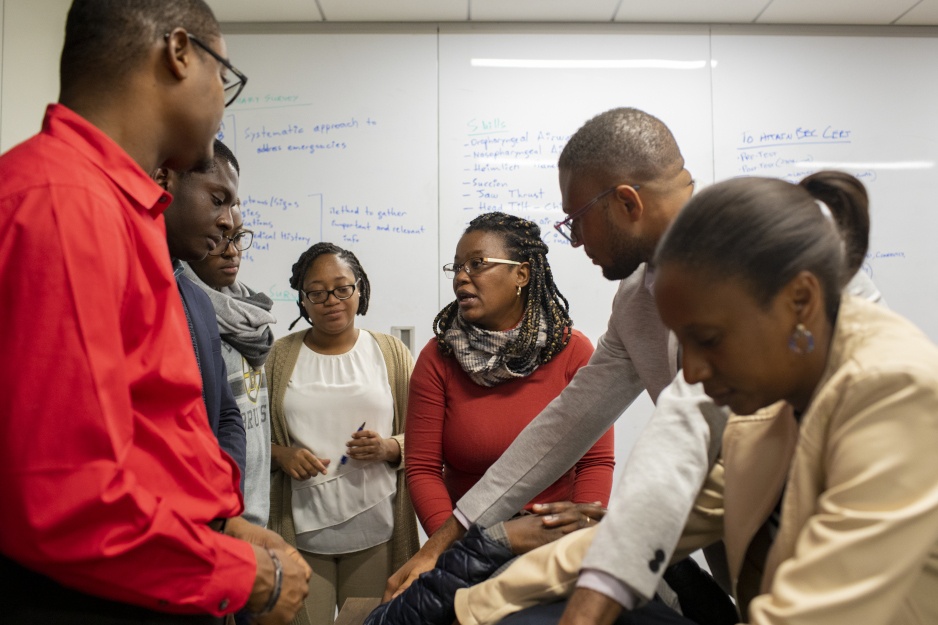 Dr. Linda Rimpel said two of the most important questions about lifesaving care—where are you when you have an emergency, and what can be done for you—are, all too often, much too closely connected.

“Emergencies happen everywhere in the world, but they are not treated equally,” Rimpel, chief of emergency medicine at the Partners In Health-supported University Hospital in Mirebalais, Haiti, said this month.

In low- and middle-income countries such as Haiti, Rimpel said, there frequently is not enough health infrastructure or trained clinicians to provide high-quality emergency medicine and care. The emergency medicine shortfall in impoverished countries around the world creates a staggering, deadly gap: 54 percent of the entire, worldwide burden of disease could be treated with emergency care, potentially saving more than 24 million lives annually.

Zanmi Lasante, as Partners In Health is known in Haiti, is doing pioneering work to bridge that gap in the Caribbean nation. Rimpel’s comments came at PIH’s offices in Boston, where she and other emergency physicians gathered for a weeklong training on how to teach and implement the World Health Organization’s Basic Emergency Care course. The goal is for participants to return home and train other physicians and nurses across Haiti in vital emergency care procedures, essentials, and techniques.

Haiti’s devastating 2010 earthquake, which killed nearly 300,000 people and injured hundreds of thousands more, made the need for emergency care in Haiti starkly clear. Zanmi Lasante opened University Hospital—a 300-bed teaching hospital known locally as Hôpital Universitaire de Mirebalais—in 2013, in partnership with Haiti’s Ministry of Health. One of the hospital’s primary goals was to strengthen emergency care in the country. When the hospital opened, there were no emergency doctors in the country, so most patients with emergency conditions were treated by providers who didn’t have emergency care expertise, often contributing to unnecessary deaths or disabilities.

To address this, PIH began the nation’s first emergency medicine residency in 2014.

In the five years since, 18 fully qualified emergency physicians have graduated from University Hospital, and now work at several hospitals around the country. Yet, Rimpel knows that to truly have an impact on emergency care in Haiti, training programs must expand beyond University Hospital.

The need for good emergency care is driven by much more than trauma. In Haiti, nearly 80 percent of emergency patients are not suffering from traumatic injuries. Heart failure, hypertension, pneumonia, tuberculosis, cancer, and other ailments also can bring people to emergency departments.

At University Hospital, that means serving a population of more than 3 million people from the surrounding region, and beyond. Emergency patients needing specialized care often get referred to University Hospital from other health facilities across Haiti, and from the capital of Port-au-Prince, which itself has a metropolitan area of an additional 2.6 million.

One result of the large population and low number of hospitals is that emergency patients often first go to smaller, local facilities, where they should get the essential medications and procedures needed to stabilize them. However, most physicians and nurses in Haiti, particularly in such frontline facilities, have not had formal emergency care training. That means critically ill patients don’t always get the immediate stabilization they need to survive, let alone reach specialized care at University Hospital.

This is the need that Dr. Rimpel and her team are working to address. She and her colleagues will implement the WHO’s Basic Emergency Care course with front-line providers across the country, training them in the key skills they need to care for emergency patients.

It’s one part of a much larger solution. While the WHO course is only a week long, teaching it across Haiti will spread vital lessons and techniques that can immediately improve emergency care and save lives, with relatively low expenses or resources, while long-term training programs, like University Hospital’s emergency medicine residency, continue.

Implementing the WHO course also will help build emergency medicine advocacy and awareness in Haiti. That momentum already is growing: Rimpel said there’s a new Haiti Society of Emergency Medicine and Disaster Medicine—and its first president is an emergency doctor who trained at University Hospital.

Dr. Philippe Dimitri Henrys grew up in Hinche in central Haiti, north of Mirebalais. He was in medical school in Port-au-Prince—sitting in class at the Université Notre Dame d’Haïti, where his father was a professor—when the earthquake struck.

He said that experience, helping people outside the building, and witnessing firsthand the critical shortage or absence of emergency care in Haiti, played a huge role in his work to become an emergency physician.

Henrys completed the three-year emergency medicine residency at University Hospital, and for the past five months has worked at PIH-supported St. Therese Hospital in Hinche.

Henrys said he’s often reminded of the impacts of Haiti’s growing emergency care network when he’s out and about in Hinche, at the market or on his way to work, and former patients approach to thank him for the care they received.

“They remind me they’ve been to the ER and they really like the way I took care of them and they appreciate it,” Henrys said. “And this is the kind of thing that really gives you a sense of purpose. To know what you’re doing is useful, to know it helps people, to know it improves their daily life.”

In the decade since the 2010 earthquake in Haiti, see how PIH has worked with the Haitian Ministry of Health to build a world-class teaching hospital, launch a mental health program, battle malnutrition, fight cholera, and so much more.