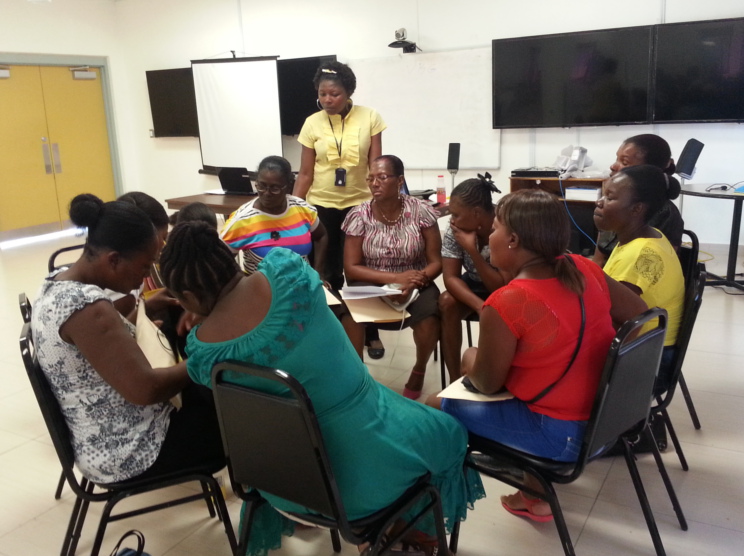 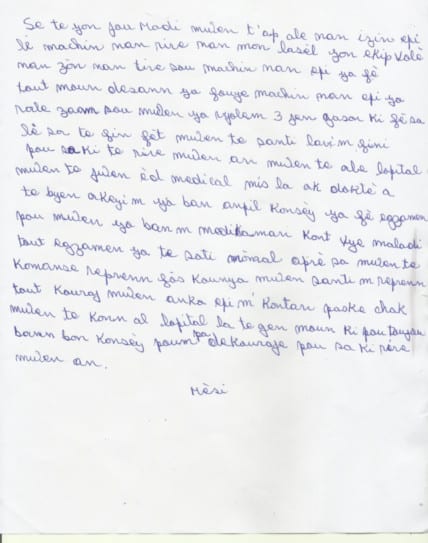 It has been nearly a year since PIH Canada and our Haitian sister organization Zanmi Lasante (PIH/ZL) launched PIH’s first comprehensive program to treat and prevent gender-based violence in Haiti. While we can’t yet speak to the long-term impact of our efforts, a note received by our Haitian colleagues from a woman we’ll call Rodeline (not her real name) offers compelling evidence of the program’s importance. One morning Rodeline and several other women were attacked and raped while on their way to the market:

“After [I was raped], I felt very distraught and thought that my life was over,” Rodeline wrote in her note. “I went to the Verettes health center where the attending nurse and the doctor welcomed me, taking care of me emotionally and medically. They listened to me and counseled me. Later they ran some lab tests and gave me some medications to avoid potential diseases. After the lab tests showed normal results, I felt better and psychologically stronger.” (Translated from original Creole).

Rodeline’s experience speaks to the need for both medical and psychosocial care and support in cases of gender-based violence. Recovery from a trauma like rape – and the stigma that accompanies it – demands a holistic approach. PIH/ZL has historically provided medical exams, medical certificates and psychosocial support for victims of sexual violence. Through this project we’re able to strengthen coordination and supervision around these activities, with social workers focusing exclusively on integrating prevention, care, treatment and access to social and legal supports.

Finding justice through the legal system can play an important role in healing, which is why the project is enhancing the capacity of women’s groups to accompany women and girls through the justice system. At the same time, PIH/ZL is building better gender-based violence surveillance structures linking law enforcement, women’s groups and human rights organizations.

Training for providers and community education are also key components of the project. ZL staff organized 191 education sessions at the community and health facility levels in the first half of 2015, reaching more than 16,000 people. Participants included clinical staff, community health workers, members of women’s associations, representatives from the police and judiciary, community leaders, and members of the general public.

As a result, women in the community are also becoming more aware of the services that PIH clinics and hospitals can provide. Cases of gender-based violence treated at PIH/ZL sites more than doubled in the second three months compared to the first three months of the project. The project is covering transportation costs to and from health facilities to ensure that economic barriers don’t prevent women from seeking care.

As for Rodeline, the closing lines of her letter were marked by gratitude: “I am happy and grateful for the health center’s welcome. Every time I went there, the staff always took care of me. They used encouraging words so that I could avoid letting what happened to me destroy me.”