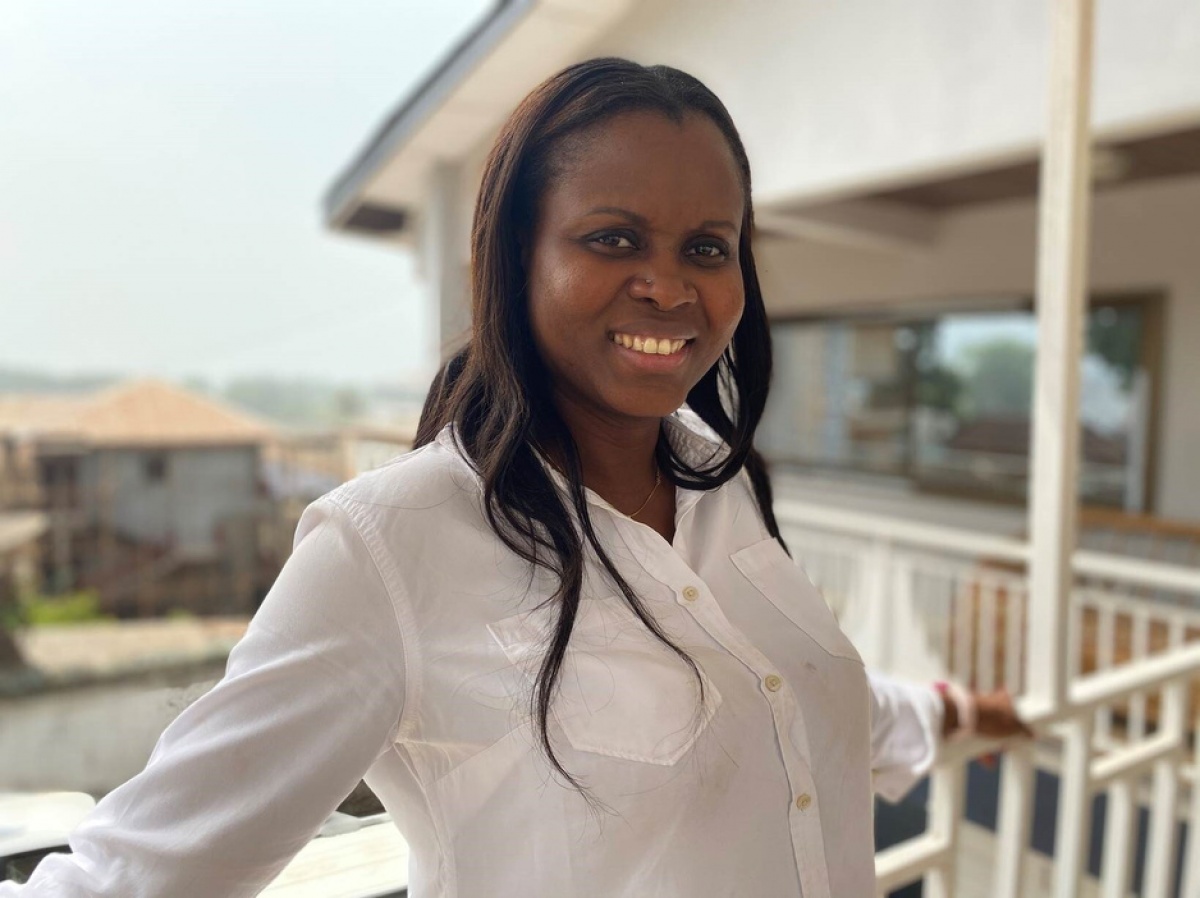 Some of Vicky Reed’s earliest memories growing up in Freetown, Sierra Leone are of the health clinic operated by Mildred Hannah Moore: her grandmother, a nurse.

“On Saturday mornings, my parents would drop us off at my grandparents’ house, and my grandmother would take me and my brothers to the clinic to spend the whole day there,” said Reed. “She ran it with her friend, a midwife, and my uncle sponsored it from the United States.”

Of the myriad sights, sounds, and smells that could linger with a child passing their Saturday at a busy health facility, what was most prominent to Reed was the care her grandmother offered her patients.

“Patients who had no money at all came into the clinic. My grandmother offered most of her services for free,” said Reed. “She treated patients like they were part of her family. She treated them like she treated us.”

Today, Reed, 43, is continuing her grandmother’s legacy as the director of nursing for Partners In Health in Sierra Leone. Working primarily at PIH-supported Koidu Government Hospital in Kono District, she mentors nurses and strengthens health care for a marginalized patient population much like her grandmother did.

“My grandmother worked and ran the clinic up until months before she passed away, when she was 85,” said Reed. “I think I always wanted to do something in line with what she did: something of service. [Nursing] was always in the back of my mind.”

Neither Here Nor There

The dream of becoming a nurse would stay firmly planted in the back of Reed’s mind—though her mother and grandmother urged her to pursue it—for decades and across continents. In 1993, when she was 15, Reed moved to the United States to continue her education. She’d finished high school early, and Sierra Leone’s 11-year civil war was entering its second year.

“Things were so shaky in the country. I could have gone to college here, but it seemed more stable to go away for school. I started at a community college in New York,” said Reed.

Reed’s parents soon had to leave the family’s home in Sierra Leone, first seeking refuge in Guinea and then settling in The Gambia for two years.

“When my parents left The Gambia, there was a six-month period I didn’t even know where my family was,” she said. “It was all very difficult. I was in college, technically, so I was expected to be independent, but it was a new environment, my family wasn’t there, and I was struggling with tuition.”

She also struggled with finding a sense of home in the U.S.

“As soon as you open your mouth and talk, people ask you, ‘Where are you from? Who is this African girl?’ It was constantly trying to prove to them, and to yourself, that you belong,” said Reed. “I always pushed myself to be successful academically, just so I could fit in. It was this constant pressure.”

Still, she harbored no expectations of returning to Sierra Leone.

“The war really destabilized a lot of things for a lot of different people,” she said. “People got scattered all over the place. I did miss Sierra Leone, but with no family there and a lot of my friends having left, there was really no incentive.”

Reed forged ahead: She transferred to the University of Maryland, earned degrees in international business and Spanish, and began a career in banking. But her grandmother’s inspiration lingered—moving from the back of her mind to the forefront.

After seven years in banking, Reed could no longer ignore her draw to nursing, and decided to volunteer in a busy E.R. in an impoverished corner of Washington, D.C.

“Seeing patients, mostly indigent, coming in their most vulnerable state, and the way the nurses took care of them…it was inspiring,” said Reed. “It was those small things outside of medical care: sitting with patients, talking to them, asking them how they’re feeling, how their pain is…that’s really what makes a difference. It’s what my grandmother did, and it’s what cemented that this is what I wanted to do.”

That’s when Reed decided to pursue her second career, and enroll in nursing school.

Reed’s first nursing job, at a 900-bed hospital in downtown Atlanta, had her caring for people who were marginalized—much as her grandmother had. “We mostly worked with people that society had given up on: poor people, alcoholics, drug users,” she said.

One year out of school, the news arrived of her grandmother’s passing. The funeral would be held in Sierra Leone; it would be Reed’s first time back in 18 years.

She remembers the moment well: held in one of the largest churches in Freetown, and the funeral was teeming with people.

“Crowds were coming up to me and my family members, talking to us about how much my grandmother did for them,” she said. “It inspired me to rethink my whole approach to nursing: I’m here to serve people, regardless of what their circumstances are.”

Returning to Sierra Leone stirred something inside her, too. Seven years later, she felt a pull to return again. Ever curious, even while on vacation in Freetown, she decided to shadow clinicians at the city and country’s major hospitals: a general hospital, a maternity hospital, and a tuberculosis hospital (now supported by PIH).

What she saw at these facilities was “a nightmare.”

“I expected it, because I grew up here, but I didn’t realize how bad things were as far as resources, patient care, the lack of respect nurses had,” said Reed. “When I went back to my hospital in the U.S., I was completely distracted.”

The things her American colleagues would complain about no longer felt relatable.

“It wasn’t fair for me to judge them or their reactions based on experiences I’ve had,” said Reed. “This is their reality.”

It just was no longer hers.

“I’m in the wards working hands-on and taking care of patients with nursing staff,” Reed explained. “I see what the needs are, and can use what I’ve observed to set up policy.”

Lack of quality training and clinical skills is one area Reed quickly identified as needing investment. “The level of education, because of the war and other things, is very low,” she said. “We have nurses coming out of school who really don’t know anything. So we have to start from scratch.”

Reed is currently working on addressing this challenge through PIH’s Global Nurse Executive Fellowship, a year-long nurse leadership program that culminates in a capstone project. She was among 10 fellows across six countries selected through a competitive process for this second round of fellows. For her capstone, Reed is developing a nurse orientation program around one central question: ‘What are things that have never been taught in nursing programs in the country?’

It will specifically address communication; collaboration between doctors, nurses, and pharmacists; and clinical skills,” said Reed. “In the U.S. we take for granted that we ought to know these things. But remember, we’re in a setting where the priorities have always been just trying to survive.”

Such is the other major barrier to quality nursing care that Reed identified: a sense of disempowerment among nurses, not only skills-wise, but existentially.

“Nurses are not really motivated or inspired here,” she explained. “Most of them are not paid a salary. And they don’t have a voice to advocate for themselves. The field is mostly women, but men are always the decision makers [within the health system]. There’s just this huge chasm between the sexes, and we see that playing out in nursing.”

Reed says she is constantly trying to think of ways to make nurses feel seen, valued, and capable. One simple, but powerful tool: Making an open-ended commitment to her staff.

“The staff is so used to clinicians and organizations coming for a short time, trying to put things in place, and then leaving,” Reed explained. “But there’s trust now. One of the defining moments was the COVID-19 outbreak; I had the option of leaving for the U.S., but how would that look, amid the biggest crisis to face us [since Ebola]? Staying was an ‘aha’ moment for the nursing staff. I’ve noticed more engagement.”

That engagement starts with attendance.

“When I first came, I would go into the hospital at night and there was nobody in the wards,” she said. “Patients were dying left and right. Now, there’s more accountability and engagement. There are several nurses now who call me saying, ‘I want you to be my mentor.’”

Kadijatu Wurie Jalloh, who cares for infants at Koidu Government Hospital’s special care baby unit, is one such nurse.

“Vicky is friendly to the nurses at the hospital, takes good care of us, and teaches us how to provide care properly,” Jalloh said. “She inspires us a lot, and makes me love nursing.”

A key to transforming patients’ outcomes, and health overall, Reed says, is to invest in nurses. No matter how long or difficult that process, she remains determined to give nurses the respect and authority that, since childhood, she knows they deserve.

“This is something I want to see with nurses in Sierra Leone and with women in general, in all spheres in the country,” Reed said. “Leaders who are capable, uncompromising, able to advocate, and able to have an impact. I think we’ll see steps towards more inclusiveness. But we really have to make a concerted effort to change this narrative.”

See how Mary Cooper, an accountant at PIH, brings her passion and family values to work every day.