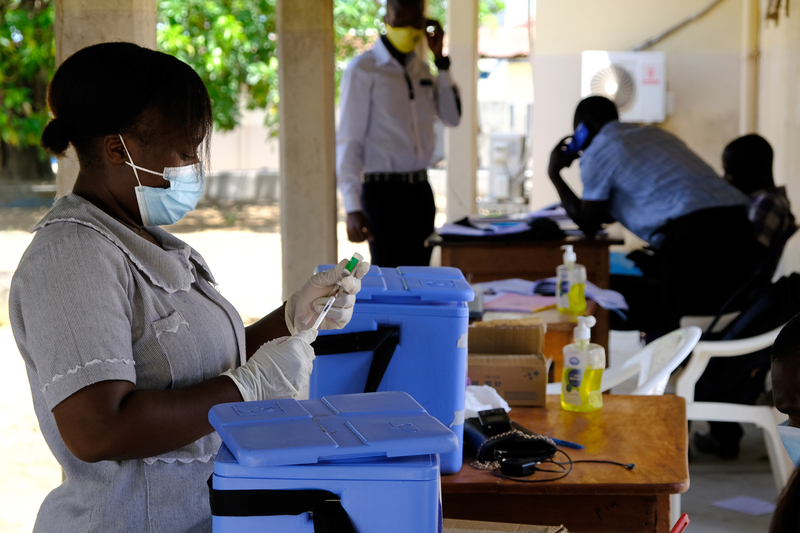 Three months in, dozens of countries yet to receive a single dose

More than three months ago, COVID-19 vaccines began to roll out and a 91-year-old woman in the United Kingdom became the first person—outside of a clinical trial—to receive a vaccine. Six days later, a nurse in New York City became the first person in the United States to get vaccinated. Since then, more than 400 million doses have been administered around the globe.

Yet, there are still dozens of countries that haven’t received a single dose.

This list includes countries where Partners In Health (PIH) works, such as Haiti. While it’s great news that communities are getting vaccinated, it is vital to recognize that if we don’t vaccinate the most poor and vulnerable communities, everyone will continue to be at risk.

“No one is going to be safe until everyone is safe,” says Joel Curtain, PIH’s director of advocacy. “We can’t have an approach where only rich countries are vaccinating themselves. A successful strategy requires vaccinating the whole world—it’s both a moral and pragmatic imperative.”

A majority—about 75 percent—of all the vaccines delivered across the globe have been sent to 10 countries: the U.S., China, the U.K, Israel, the United Arab Emirates, Italy, Russia, Germany, Spain, and Canada.

This is not an equitable or ethical approach, which is why PIH is pushing to make sure vaccines are accessible to everyone as soon as possible.

A Push for Increased Vaccine Supply

PIH supports a two-pronged approach for ensuring equitable access to COVID-19 vaccines, which includes increasing the global supply of vaccines and their equitable global distribution.

When it comes to supply, PIH advocates for a People’s Vaccine, which provides protection freely and fairly available to all, prioritizing those most in need globally. The initiative calls on governments and pharmaceutical companies to share COVID-19  technologies and knowledge free from patents. Additionally, PIH joined other organizations and countries to urge the World Trade Organization to waive intellectual property rights to increase the production of COVID-19 vaccines and treatments.

“We need to remove the intellectual property for vaccines,” says Dr. Evrard Nahimana, PIH’s Africa region policy and partnerships advisor. “It’s not something fancy that will cost a lot of money to do. It’s a pragmatic solution to come together and save lives. We don’t want to wait until 2025 and continue to see people dying.”

Many rich countries and pharmaceutical companies say there are too many technical barriers to ramp up production, but these are the same arguments used 20 years ago during the movement for access to HIV treatment, notes Curtain, who says we’re currently experiencing a “global vaccine apartheid.”

“We’re hearing the same arguments from pharmaceutical companies about it being too difficult to produce these vaccines in facilities around the world, all in order to protect their large profit margins.” says Curtain. “There are many steps governments can take to invest in global production to break this vaccine apartheid, and prioritize people not profits.”

COVAX is another key initiative that PIH supports for collective purchasing and distribution of COVID-19 vaccines. It’s a collaboration co-led by the Coalition for Epidemic Preparedness Innovations, Gavi, and the World Health Organization to help develop, manufacture, and distribute COVID-19 vaccines in bulk at low-cost. Public and private partners, governments, foundations, and others donate to COVAX, then COVAX negotiates prices to buy vaccines in bulk. The vaccines are then sent to countries with limited resources. Ultimately, COVAX aims to deliver two billion doses to low- and middle-income countries by the end of 2021. This goal includes the vaccination of at least 20% of the population in the world’s poorest countries.

“COVAX is a wonderful initiative, but 20% is not enough. We need at least 60% to reach collective immunity and be able to control the pandemic,” Nahimana says.

COVAX partners aren’t immune to vaccine nationalism, when countries prioritize vaccinating their own communities first. It has already led to delays in supplying vaccines to countries, including to sites where PIH works. PIH will continue to fight for equitable vaccine access for all at local, national, and international levels of government, knowing that more widespread commitment toward global vaccine equity will help the most vulnerable communities get vaccinated as soon as possible.

“We’re positioned to reach the last mile at PIH,” Nahimana says. “At the national level there are a lot of players to support the government in general. But in the most remote areas with the most vulnerable people, that’s where PIH steps in to advocate and support those people.”

As of late March, all PIH-supported countries in Africa—Lesotho, Liberia, Malawi, Rwanda, and Sierra Leone—have received their first batch of vaccines from COVAX. Most countries have kicked off their vaccination campaigns, and they’re all prioritizing health care workers, including community health workers, then individuals older than 65 and those with chronic conditions. As of March 26, about 10,000 people in Sierra Leone had been vaccinated with a single dose; 13,000 in Lesotho; 348,000 in Rwanda; and 71,000 in Malawi.

Learn more about why PIH Canada is calling on the Canadian government to support the TRIPS waiver at the World Trade Organization.

DONATE NOW
Read the detailed report of the four-pronged strategy to save lives in the vulnerable communities we serve, and support global efforts to contain the spread of COVID-19.
Read Strategy
Categories: Featured Stories
Tags: COVID-19Vaccine