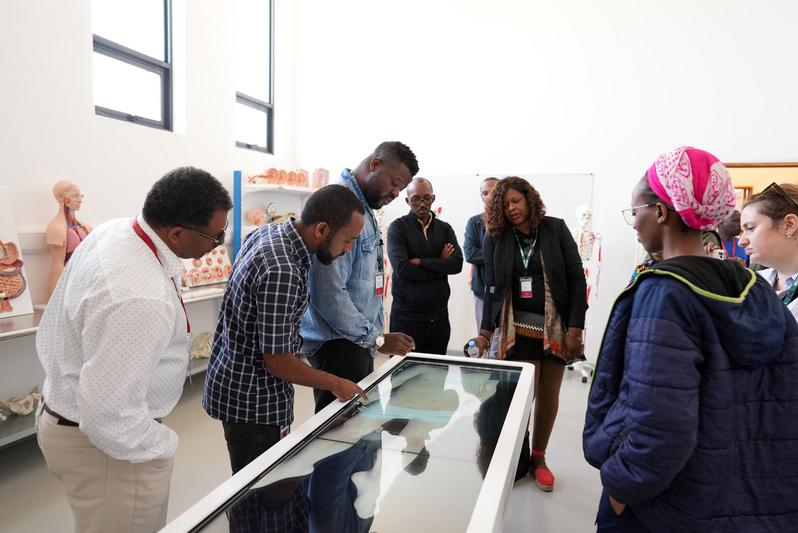 PIH fights to make treatment for TB, HIV, COVID-19 accessible to all

A pill could save the man’s life. But it wasn’t available in Liberia.

For months, he had suffered from an unknown disease, without access to a diagnosis or drugs. He had poured his life savings into a search for answers. But his money was running out. So was his time.

He was already skin and bones—a shell of who he once was. In a last-ditch effort, he went to Monrovia, the capital, where the country’s most advanced hospitals were located.

He brought a coffin.

It was a story that Dr. Maxo Luma and others at Partners In Health had seen too many times—patients becoming impoverished and eventually dying because they lacked access to lifesaving drugs.

Fortunately, Luma recalls, the man was able to access a diagnosis—extensively-drug resistant tuberculosis—and medication through Partners In Health.

But not all patients make it.

“Every year, millions of people die of HIV and TB,” says Luma, executive director of PIH in Liberia. “It is not really the diseases that kill them. It’s social injustice.”

Tuberculosis is 100% curable. HIV can be brought under control within six months with medication. Yet, millions of people die each year of these diseases and others, overwhelmingly in low-income countries, because they lack access to treatment and care.

That’s a reality that PIH is determined to change.

For more than 30 years, PIH has provided lifesaving drugs to millions of patients, free of charge, along with the care and essential resources they need to survive. That work is guided by a simple yet radical vision: health care is a human right.

Years later, Dr. Carole Mitnick still remembers the lengths people would go to in order to get lifesaving drugs in Lima, Peru in the early 1990s, when treatment for multidrug-resistant tuberculosis wasn’t widely accessible.

Patients could get drugs for tuberculosis for free from the Ministry of Health; but if they needed treatment for MDR-TB, an especially deadly and drug-resistant variant of the disease, they would have to buy the medication themselves—nearly impossible for those living in Carabayllo and other communities in Lima, where the average income was as little as $1 a day.

“The stories were just heart-wrenching,” recalls Mitnick, who was doing her doctoral research with PIH in Lima at the time.

A man with MDR-TB would go to the markets in wealthy parts of town and rummage through trash in search of lemons to sell. A woman became a sex worker to afford her husband’s medication.

If patients and their families managed to buy the drugs, they would often ration supplies—cutting pills in half, taking pills every other day instead of daily, or taking them for a month and then stopping—lessening their effectiveness and putting patients at risk for even more resistant tuberculosis.

By 1995, an outbreak had emerged in Carabayllo, where PIH Co-Founder Dr. Jim Kim had begun to work with Peruvian colleagues. But the growing number of deaths were ignored by the global health establishment at the time. Health leaders in the Global North argued that a disease like MDR-TB was too costly and complicated to treat in impoverished places like Carabayllo.

PIH set out to prove them wrong.

Working in partnership with Peruvian doctors and the Ministry of Health, PIH began treating patients in Carabayllo—against the advice of the global health establishment—providing drugs and care, free of charge.

Dr. Leonid Lecca, now executive director of Socios En Salud, as PIH is known in Peru, saw that work and its impact first-hand.

“I remember in the beginning, when Socios treated MDR-TB patients, we had many challenges,” he recalls. “Now, the situation is different…the MDR-TB program in Peru is due to Socios En Salud’s work.”

Thousands of lives were saved. And a growing body of evidence was created to show the world that MDR-TB was, in fact, treatable in the poorest places, contrary to what global health leaders had once claimed.

PIH’s efforts catalyzed change on a national and international level and bolstered a growing movement for global health equity. In Peru, the Ministry of Health launched a nationwide program to provide MDR-TB testing and treatment for free. And the World Health Organization updated its policies, expanding global access to lifesaving MDR-TB treatment.

A Cure For Injustice

PIH’s work to make drugs free and accessible had begun years earlier, thousands of miles away in Cange, Haiti, in response to another disease.

PIH began its work in Haiti in 1983, when Co-Founders Dr. Paul Farmer and Ophelia Dahl opened a clinic in Cange, a rural village in the Central Plateau. As Farmer, Dahl, and their Haitian colleagues provided free health care to dozens of people once unserved, a deadly infectious disease was spreading worldwide.

The first case of AIDS was detected in 1981 in the United States. By 1986, more than 38,000 cases had been reported from 85 countries. AIDS is the latest and deadliest stage of infection with HIV, a virus that attacks the immune system.

“Back then, HIV was a death sentence,” says Maxo Luma, who saw friends fall ill with the disease in Haiti, where he was born and raised.

The first antiretroviral treatment for AIDS was approved in the U.S. in 1987. But the drug remained unavailable in most of the world. It was nowhere to be found in Haiti, where even the richest patients would have to fly to Miami and pay as much as $4000 per month to access it, Luma says.

It was a status quo that PIH refused to accept.

Farmer and his colleagues—primarily Haitian doctors and nurses—decided to treat patients anyway. PIH staff bought drugs in bulk in the U.S. and took them to Haiti, sometimes in backpacks, where they were given to patients free of charge.

As its HIV work expanded, PIH joined a growing global health movement in demanding that the U.S. and other wealthy nations make HIV treatment accessible to all patients, worldwide. No patient, PIH argued, should have to die because they couldn’t afford drugs and care.

The work that began in Haiti soon spread beyond its borders.

As a young clinician in Rwinkwavu, Rwanda, Dr. Jean Claude Mugunga remembers the constant frustration of seeing pharmacy shelves empty and having to write prescriptions for patients that he couldn’t fill.

“For me, as a doctor, it was very frustrating,” he recalls. “It was so demotivating.”

No HIV drugs were available in Africa in the early 1990s, despite their availability in the U.S. and Europe. The first highly active antiretroviral combination therapy—a far more effective treatment—was approved in rich countries in the mid-1990s. But the drugs were unavailable in Africa. Only the wealthiest Rwandans could access them and, even then, would have to travel abroad and spend thousands of dollars.

Mugunga first learned of PIH as an intern at Rwinkwavu Hospital.

“I heard of PIH doctors from the U.S. coming to rural areas. They were bringing HIV drugs,” he says.

The news intrigued him.

Most international organizations in Rwanda at the time were working in major cities like Kigali, not in rural areas, he says. And doctors with PIH were providing more than medicine: they were asking if patients had food to eat.

“I was like, wow this is unheard of. No other place was doing that,” Mugunga says. “But PIH was making sure patients were coming and were not charged.”

Since its earliest years, PIH has provided not just medical care, but also essential resources like food, housing, and transportation. That work is guided by the belief that it’s not enough to hand a patient a drug or even provide a surgery—they need food, housing, transportation, and financial stability to stay on track with their recovery. In fact, those essentials, which PIH calls “social support,” often make or break whether a patient can access health care at all.

That approach has saved lives.

Mugunga, who joined PIH in 2013 and is now deputy chief medical officer, recalls seeing patients, on the brink of death, make full recoveries. Some would even join PIH, known in Rwanda as Inshuti Mu Buzima, to help their communities, becoming some of the country’s first community health workers.

The stories were a “miracle,” says Mugunga. And their impact was felt far beyond Rwinkwavu.

PIH’s HIV work helped inspire global policy change, including the creation of The Global Fund and PEPFAR—two crucial mechanisms that have enabled low-income countries to access treatment for HIV, malaria, and TB, saving millions of lives.

Even as colossal strides have been made in the fight against HIV, TB, and other infectious diseases such as hepatitis over the years, there is still much work to be done. Drugs and health care remain unaffordable for millions worldwide.

In recent years, the COVID-19 pandemic has brought new challenges to the movement for drug access, highlighting longstanding injustices in global health as wealthy nations hoarded the world’s supply of vaccines. The pandemic also deepened enduring challenges like the fight against TB.

But PIH remains committed to the work it began, decades ago. Making drugs free and accessible and saving lives, says Luma, is not a “favor.”

“It’s a moral imperative,” he says. “This is what everyone should get. We’re talking about health care. This is a basic human right.”

In 1986, Partners In Health began caring for patients diagnosed with HIV and AIDS in Haiti. Soon thereafter, PIH leadership joined a growing global advocacy movement fighting for accessible, affordable, lifesaving antiretroviral treatment and the rights of all patients, despite nationality or economic status. View a timeline of PIH’s work and advocacy in HIV and AIDS.