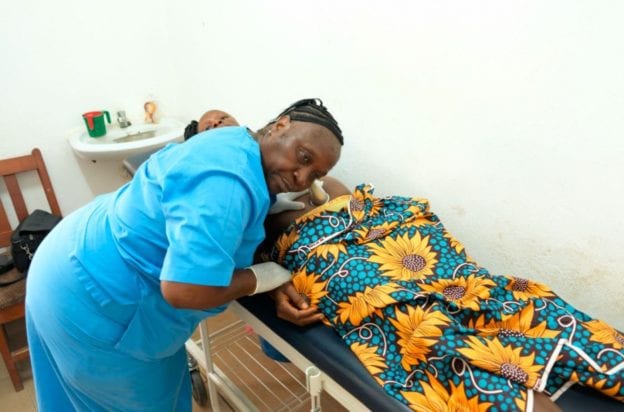 Leaning over the pregnant patient before her, Regina Korgbendeh touched the woman’s looming stomach and spoke softly in Kono, a dialect common in eastern Sierra Leone: “Thank you for this child.” Blessing an unborn baby is a custom strictly followed in communities throughout Kono District. Once the prayer was complete, Korgbendeh, 48, led her patient over to a chair, where a waiting midwife asked about previous pregnancies and the woman’s medical history. It’s Korgbendeh’s job as a traditional birth attendant (TBA) to incorporate local customs, like this one, into the medical care provided by Wellbody Clinic, a Partners In Health-operated facility.

Historically, TBAs have been the go-to women in village communities for anything related to pregnancy and childbirth. Neighbours often refer to them as “auntie” or “mother” – terms of enormous respect. After experiencing a traumatic labour herself, Korgbendeh decided to become a TBA to prevent other women from enduring what she went through. Many countries, however, now discourage expectant mothers from relying on TBAs, due to the dangers that women face during childbirth without supervision from a trained clinician. Sierra Leone’s government enacted a law in 2010 banning TBAs from carrying out deliveries away from a clinical setting. If found disobeying this law, the punishment is severe—not just for a TBA, but for expectant mothers and anyone else involved.

Although there’s no question that safety during childbirth should be a priority, restriction of TBAs doesn’t necessarily ensure good health outcomes for women. A lot of women in Kono, for example, consider health care facilities to be strange, nerve-wracking places, meaning many choose to avoid health care facilities altogether during pregnancy. And with TBAs no longer able to assist them, they are left to deliver without any experienced supervision. This sentiment arguably contributes to the horrifying reality for women in Sierra Leone: a 1 in 17 lifetime chance of dying during pregnancy, delivery, or its aftermath.

A new model for safe birth

Dr. Bailor Barrie understood this when he founded the maternal health program at Wellbody Clinic in 2010. He knew that it wouldn’t be enough to offer high-quality medical care without also ensuring that women felt comfortable seeking and receiving the care. To bridge the gap between tradition and a formal health care setting, Barrie pioneered the employment of TBAs, like Korgbendeh, at Wellbody Clinic. His decision to do this was in contrast to the opinions of numerous institutions, however. The World Health Organization discounted the role of TBAs in clinical practice, saying they are simply “an interim solution,” and the United Nations has previously defined TBAs dismissively as “independent (of the health system), with no formal training.”

At Wellbody Clinic though, Korgbendeh and her team of seven TBAs are proving the experts wrong.

“TBAs have an incredibly special bond with Sierra Leonean women. They can connect on a level that clinicians aren’t always able to,” Barrie explained. “When TBA-handled deliveries became illegal, a lot of women were left feeling abandoned during their labours. They feared bad treatment and costly charges at the hospital. At Wellbody, we felt strongly that by engaging TBAs we would begin to evolve the mindset of communities and, more importantly, meet the needs of women.”

Korgbendeh, after years of experience supporting expectant mothers, echoed these thoughts. “Girls used to hear rumours that they would be treated aggressively. They worried about injections that prick the skin,” she said. “Some believed the clinical staff would test drugs on them. Giving birth was always something women did as a tight-knit group in ‘the bush’ – a highly honoured tradition in village communities.”

Being Sierra Leonean himself, Barrie has a firm understanding of local culture. He approached chiefs of the 14 chiefdoms within Kono to gain their support for his plan to employ TBAs. Korgbendeh remembers being invited by her village chief to be trained as an official TBA at Wellbody Clinic. “Dr. Barrie showed us how to talk to patients in the community about the risks and dangers of delivering alone,” she said. “Patients listen to TBAs because we’re like mothers to them.”

When Barrie invited PIH to take full responsibility of Wellbody Clinic in 2014, TBAs were firmly embedded into clinical practice. Their inclusion is something PIH has strongly advocated for ever since. A team of eight TBAs now work hand-in-hand with midwives to deliver maternal care. Each TBA lives in a different area of Kono, guaranteeing that women throughout the district of 500,000 people have access to high-quality care and safe births.

Korgbendeh cares for all the women in a region of Kono District called Sefadu. “I’m happy not to deliver their babies myself, though” she said. “Now I’ve been properly trained, I realize how many dangers there are.

“Sometimes after I delivered a baby, I would look down and see a lot of blood on my hands and all over my feet,” she remembered. “It was terrifying. At that time, if a baby died, people would say it was the woman’s fault because she hadn’t pushed hard enough or she hadn’t been cooperative. They would say she had bad water (infected blood).

“Lots of things are done differently at Wellbody Clinic though, and babies don’t die anymore,” Korgbendeh said. “Women no longer deliver on a rug on the hard floor; we lift her high onto a bed. And we don’t cut the umbilical cord with a blade or a piece of thread; everything is clean and we wear gloves. A trained midwife catches all of the dangers and I’m there to soothe the woman.”

TBAs aren’t just responsible for drawing pregnant women to the clinic either. They accompany women throughout their pregnancies – from prenatal classes and appointments, through delivery and postnatal appointments. The roles of midwives and TBAs are clearly defined. Midwives are trained to administer clinical care, and TBAs play an accompanying role, to both midwives and patients. By providing access to regular training and medical equipment, PIH enables midwives and TBAs to deliver the best possible care, at every point along a woman’s pregnancy.

After blessing her patient’s unborn baby, Korgbendeh said: “This woman hadn’t been to a clinic before today, so she was quite nervous to come. At Wellbody we have a saying: ‘If you push women too hard, you will step on your own toes.’ It’s important not to be impatient, or this woman might not come back to us. When she arrived, staff gave her medicines and a mosquito bed net. She couldn’t believe everything was free. It made her so happy.”

A new mother, sitting outside the postnatal ward with her baby on her lap, expressed gratitude for the TBA who supported her during pregnancy. “My TBA was by my side from month one, all the way to the end. She even visited me afterwards, because a woman’s grave is open for 40 days once she’s delivered her child,” she said, referring to the high likelihood of maternal death after birth. “I now tell everyone in my village to go to Wellbody. I say they will be treated well and given real medicine.”

While the role of a TBA might initially sound like a straightforward one, there’s so much more to it than simply blessing a stomach. A TBA’s position in village communities, such as those throughout Kono, allows her to encourage women to pursue a safer, yet still familiar, type of care.

“Women used to stick together in the village and support one another through pregnancy because this made them feel safe,” Korgbendeh shared. “I tell them that we’re living in a computer world now. There are machines at the clinic to make sure everything is ok with a woman. Why wouldn’t you use that?”

Having access to a safe, compassionate environment during pregnancy is something that all women deserve in Kono, Sierra Leone—and worldwide. PIH recognizes that both the medical and emotional needs of women should be met through their maternal health care. By including and empowering TBAs at Wellbody Clinic, PIH also empowers patients and their communities.

“I do this job because I want to help women to see that they deserve the best health care,” Korgbendeh said. “I’m honoured to play this role for my community.”

Article originally posted on Verve Up

Read more about how PIH is supporting women’s health in all the countries where we work.

Former nurse shares her story receiving care at Butaro District Hospital in Rwanda  Posted on Oct 21, 2021 Diane Mukawera was diagnosed with stage one breast cancer at the age of 42.  As a practicing nurse, she was aware of the disease, but a discussion with a friend Read more…

All Babies Count reduced neonatal deaths by 35% in rural districts Posted on Oct 18, 2021 In Rwanda, “impinja ntizigapfe” captures a mother’s prayer—that no baby ever dies. The phrase is part of a folk Read more…