Need to Know: How Kangaroo Mother Care is Keeping Babies Healthy in Liberia 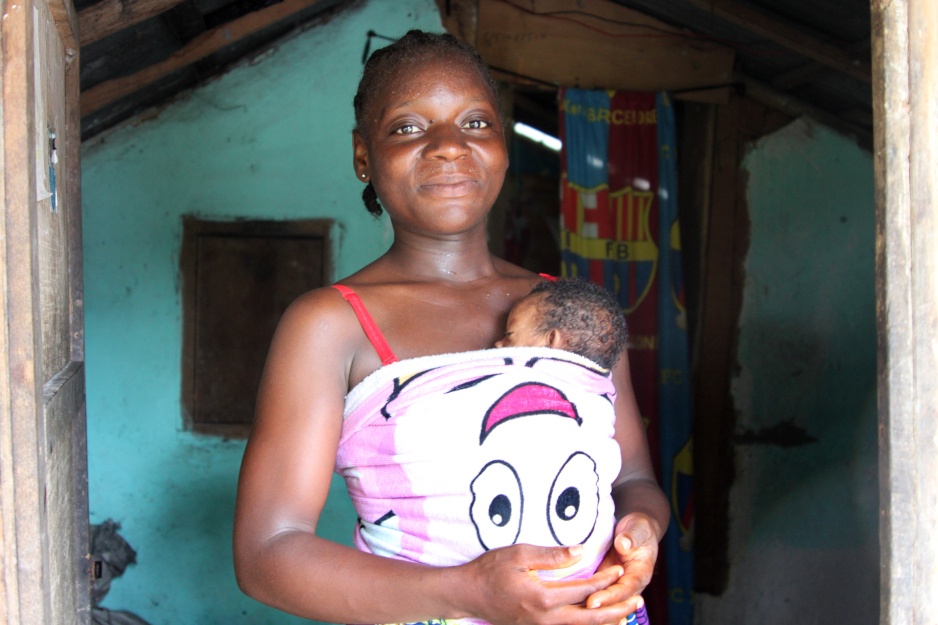 Spend a day at the Partners In Health-supported J.J. Dossen Hospital in Harper, Liberia—or in the homes and communities the hospital serves—and you’ll find mothers and babies enrolled in a vital program called kangaroo mother care (KMC).

Mothers like 22-year-old Cecile Johnson, and babies like her 10-week-old daughter, Sheba Nyemade. Sheba is Cecile’s fourth child. Her first three were born full-term, and now are 2, 3, and 5 years old. But with Sheba, Cecile needed an emergency cesarean section when she was just 28 weeks pregnant. She received the lifesaving care she needed, and baby Sheba was born Aug. 4 at J.J. Dossen, weighing 1.4 kg (2.2 pounds).

PIH’s care for the family has continued in the months since.

While kangaroo mother care has a light-hearted name, it’s a well-known approach that clinicians around the world use to decrease deaths of premature newborns, especially in countries where incubators and reliable electricity are hard to come by. Those conditions apply in Liberia, which has one of the world’s highest infant mortality rates: 26 deaths per 1,000 live births. That’s a stark comparison with rates in wealthier countries, such as Canada, which sees about 4 newborn deaths per 1,000 live births.

KMC is an intervention following childbirth, in which health workers place a newborn on the mother’s chest for skin-to-skin contact. The direct contact promotes temperature regulation, early breastfeeding and mother-infant bonding. Clinicians recommend constant skin-to-skin contact for all infants born at a low weight. Premature births, like Sheba’s, are the cause of low birth weight about 15 percent of the time. In low-resource countries like Liberia, KMC also is recommended due to the unavailability of medical equipment, inadequate staffing of trained health workers, and unreliable utilities.

PIH Liberia provides KMC at J.J. Dossen Hospital and in the Maryland County communities it serves, with nurses providing care and follow-up directly in new mothers’ homes. Infants at the hospital are eligible for KMC if they have a birth weight of less than 1.8 kilograms (about 4 pounds).

Cecile began doing KMC while still at the hospital, after delivering Sheba. But with three other small children at home, when Sheba was discharged at a healthier weight, it was a better fit for Cecile to transition into PIH’s community KMC program.

She was able to do so with the help of community health worker Evelyn Toe. Evelyn has been with PIH since 2015, and was part of the first class of CHWs who PIH trained in Maryland County. She visits Cecile every Tuesday, to check on her, Sheba, and Cecile’s three other children. During each visit, Evelyn notes Sheba’s weight, makes sure Cecile has enough baby formula, and checks in with Cecile about how Sheba is doing, to see if additional support is needed. The results are evident: Sheba has been gaining weight and is continuing to receive care, such as immunizations, at J.J. Dossen.

PIH health workers began providing community-based KMC in August 2018 and have enrolled 56 babies since, all born with low weights. While four of those newborns failed to recover and two were lost to follow-up—meaning, clinicians lost contact with the family—42 of the newborns enrolled in KMC from the surrounding community graduated. Graduation from KMC means babies reached at least 3.5 kilograms (almost 8 pounds) in weight and received vaccinations at 10 weeks old. For a recent graduation, many families involved in community care gathered at the hospital to celebrate.

Here, learn more about KMC at J.J. Dossen Hospital and beyond, with responses compiled by PIH experts including Viola Karanja, deputy executive director for PIH in Liberia.

How do you practice kangaroo care?

Nurses encourage mothers to start KMC very soon after birth, when a newborn meets the low-weight criteria. The infant is placed between the mother’s breasts, wearing only diapers, socks and a head cap. The baby’s head is turned to one side and slightly elevated, hips flexed and abducted—meaning, with legs spread—and arms well flexed. The baby lies stomach-down, its abdomen resting just above the mother’s stomach.

The baby is then wrapped in a warm, locally made KMC binder or blanket, around the mother. The mother then covers the baby with an extra blanket, and is able to move around or sleep as she chooses. The mother should carry her baby for as long as the baby can tolerate, removing the baby preferably only during diaper changes. The minimum duration is 60 minutes per session, during the first 12 weeks of life.

Estimating child mortality levels and trends is difficult. When do you know that kangaroo care is effective?

We know KMC is effective by setting criteria and monitoring outcomes.

As an example, we’ve enrolled 56 babies from J.J. Dossen, with low birth weights, into community-based KMC. The smallest baby in the program was enrolled at the hospital at 890 grams (less than 2 pounds), and discharged into community KMC at 1.2 kilograms (about 2.6 pounds). After four months in the community program, the baby graduated at 3.5 kilograms (almost 8 pounds).

A dedicated team of community health workers, nurses and a pediatrician monitored all 56 families, mostly through home visits. The team visited most families once a week after they left the hospital, weighing the baby each time and checking for warning signs of jaundice, poor feeding, cord infections, or sepsis. The team also provided ongoing mentorship in KMC and breastfeeding, along with social support such as new bed nets, mattresses, and blankets.

What happens as a result of effective kangaroo care?

Effective KMC strengthens bonds between the mother and her baby, improves the baby’s regulation of body temperature, and promotes weight gain. The baby’s risk of infection also decreases, and the baby becomes healthy, strong, and ready to be discharged home.

What is PIH doing to encourage KMC? How else does PIH support these families?

PIH Liberia has provided thorough, ongoing training for 10 nursing aides in the pediatric and obstetric wards at J.J. Dossen. The aides are the hospital’s KMC champions, and able to describe and explain KMC, help mothers begin KMC with their new babies, educate and counsel new mothers of preterm or low-weight babies, enroll newborns into KMC, mentor mothers on how to perform KMC independently, and teach mothers about healthy breastfeeding.

PIH Liberia also provides social support to mothers and families, including baby formula for mothers with low milk supplies, or for caregivers of premature babies whose mothers died in childbirth. Staff members also ensure that mothers are educated on family planning options, and able to make the best choices for themselves. PIH Liberia also encourages and supports teenage mothers who are interested in going back to school.

As part of the “Need to Know” series, learn what MUAC stands for and find out the role it plays in PIH’s malnutrition work.