One Patient Becomes Many: Expanding HIV/TB Care in Sierra Leone 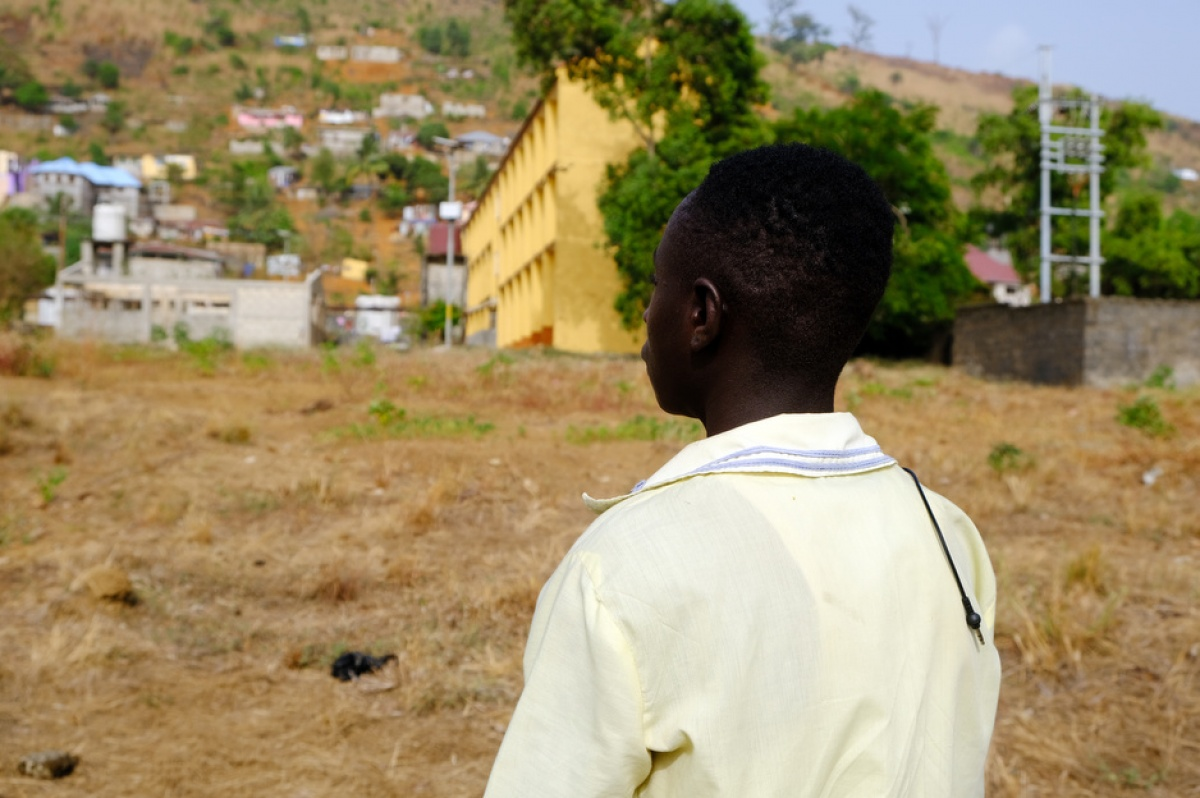 From the time he was admitted to Lakka Government Hospital, Sierra Leone’s only dedicated tuberculosis facility, staff knew that 18-year-old Hassan* was special.

“He’s a very brilliant boy,” said Armah Quist, program officer at the Partners In Health-supported hospital, located on the outskirts of capital city Freetown. “He’s the type of person who will not wait for someone to walk up to him; he’ll walk up to you.”

“People know Hassan as the boy who helps others,” Dr. Girum Tefera, PIH clinical consultant at Lakka, added. “He would go out and run errands for patients, and would entertain them. He has respect for everyone.”

Both Quist and Tefera said they instantly recognized above-average intelligence, honesty, and determination in Hassan. But as they continued to get to know him—growing accustomed to hearing him sing and rap around the wards, and watching him befriend more and more patients around the hospital—they also soon recognized how difficult it would be to save his life.

Hassan had arrived with a case of multidrug-resistant tuberculosis (MDR-TB)—the harder-to-cure, and therefore deadlier, form of the infectious disease whose yearly death toll has only recently been surpassed by COVID-19. As is common with many TB and MDR-TB patients, Hassan was also living with HIV, which he was born with. The co-infection proved difficult to treat, and Hassan’s case of MDR-TB proved particularly persistent—demanding that Lakka’s staff outmatch it.

Inspired by Hassan, they committed to doing so—setting in motion a global effort to procure the right treatment and provide the right care.

“We were all so excited [to care for him] because we knew his potential,” Quist said. “To lose potential like him would be a loss to all of us.”

In the fall of 2018, Hassan woke up at his parents’ home in Freetown, feeling ill but determined to make it to school for another day of exams. He managed to arrive to his classroom and begin his first test; by midday, he was in an ambulance.

“I was very weak, with a high fever, and unable to walk,” he recalled.

A week after he was admitted to Freetown’s public general hospital, he was discharged and placed on medication for tuberculosis—a disease he’d had before, and had been cured of, 13 years earlier, at age five.

But several months later, Hassan’s condition was unchanged. He remained weak, and the cough he’d battled as a young child returned. Further testing revealed that his TB was drug-resistant—prompting referral to Lakka, and a wave of grief.

For decades, Lakka’s reputation merited such a reaction. As a chronically under-resourced hospital without lights or running water, let alone the specialized staff and supplies to provide effective care, Lakka was  considered to be a death sentence. And MDR-TB long was a death sentence in Sierra Leone: It wasn’t until 2017 that drugs to treat and cure it were available in the country, when PIH and Sierra Leone’s National Tuberculosis Control Program partnered to invest in Lakka and introduce MDR-TB care.

The hospital Hassan arrived at in January 2019 was very different from the one he grew up hearing about—and resignation gave way to hope. Today, Lakka cures 75% of patients with MDR-TB, compared to a global average of 57%, thanks to the Ministry of Health’s rehabilitation of Lakka, supported by PIH. Together, the government and PIH have invested in 24-hour electricity and plumbing; fully-stocked pharmacy shelves, with MDR-TB drugs supplied by the national program and ancillary drugs supplied by PIH; renovated wards; social support programming, led by Quist; and doctors such as Tefera, who specialize in TB and MDR-TB care.

Immediately, clinicians started Hassan on treatment—a painful regimen, consisting of injectable drugs and 20 daily pills, but one that was meant to work quickly, within a year.

But even after six months, despite some initial improvement, Hassan remained ill—and his condition began further deteriorating.

“He continued testing positive for MDR-TB,” Tefera said, “and continued having symptoms: difficulty breathing, weight loss, swelling on his neck. We decided we needed to change his regimen as a final resort.”

“The Only Chance We Had”

“I was thinking I would get out—and then they told me the treatment was not working for me,” Hassan said. “I started feeling pain all over.”

Lakka staff did everything they could to support their young patient as he grew increasingly unwell—not just physically.

“It was a mental health issue as well,” Quist said. “He was very moody, he would not talk to anyone, he would burst into tears.”

“By the time we told him his regimen wasn’t working, the boy who would help anyone had lost all hope,” Tefera said. “He would fight with anyone.”

Quist enrolled Hassan in PIH’s social support program to ensure he had money to buy food—relieving financial stress from him and his family and giving him an opportunity to leave the hospital. And nurses banded together to provide moral support.

“They would encourage me, help me wash, sing to me and pray with me,” Hassan said.

What ultimately was needed, however, was a new treatment plan. Tefera knew what drugs to try next to treat the MDR-TB—but using them would be risky.

“If we gave the new TB drugs with his HIV drugs, it would increase the risk of cardiotoxicity,” Tefera explained. “We couldn’t ignore the TB drugs, because that was the only chance we had. So we had to think, ‘Could we change the HIV medication?’”

The answer was, at first, no. Dolutegravir, the HIV drug that would work safely in combination with the new TB regimen, wasn’t available in Sierra Leone.

But then came a series of phone calls between PIHers around the globe. Tefera called Dr. Marta Lado, then chief medical officer for PIH Sierra Leone, who was lending her Ebola expertise to fight the epidemic in the Democratic Republic of the Congo.

“Around six hours later, she called me and said, ‘We found the medicine in Haiti,’” Tefera recalled. “The National TB Program gave us the go ahead to bring the drug to Sierra Leone, and a few days later, Dr. Joia [Mukherjee, PIH’s chief medical officer] brought it.”

Within a month of the new course of treatment, Hassan’s health dramatically improved: He breathed more easily, he gained weight. After two months, in October 2019, he was well enough to be discharged to outpatient care, taking daily medication at home and coming to the hospital only once per month for a check-up and drug refill.

“I was active again,” Hassan said. “I started dancing.”

Quist was there to support Hassan as he reset his sights on the future. Hassan was determined to resume his education—though noted he did not want to return to his same school, because of stigma against his illnesses.

While he continued outpatient treatment, PIH helped him enroll in a computer course—where again, his intellect shone.

“He finished the course first in his class,” Quist said. “The instructor called me, saying, ‘This boy is very intelligent.’ I said, ‘We know. We saw it.’”

Outpatient treatment lasted 16 months, until late February 2021, when Hassan took his last MDR-TB pills and was declared cured of the disease.

By that time, he had also returned to high school full-time, with all fees covered by PIH.

“I’m so happy,” he said on the day of his last appointment at Lakka.

Today, Hassan dreams of becoming a journalist. And he’s an outspoken advocate for TB care in Sierra Leone.

“Some patients fear the disease; when they’re told they have it, they run away,” Hassan said. “What I say to them is, ‘Have courage and know that when you have the right drugs, you will be okay and stable, like me.’”

With thanks to Hassan’s case, “the right drugs” are increasingly available: After PIH procured dolutegravir, the National TB Program worked with Sierra Leone’s National HIV Program to stock the medicine in public health facilities nationwide, for patients whose co-infections, like Hassan’s, would otherwise be untreatable. Today, nearly all of Lakka’s patients living with HIV are taking dolutegravir; and across Sierra Leone, the drug is increasingly becoming the first line of treatment for co-infections.

“It’s changed the course of TB treatment nationally,” Tefera said. “Hassan was lucky; he would have died if not for everyone from PIH involved, across Sierra Leone, Haiti, and Boston. Our efforts were for one patient; but now they’re reaching everyone.”

*Name has been changed

At PIH, we believe that no one is safe from COVID-19 until everyone is safe. Learn more about the latest wave of COVID-19 that is hitting many of the countries in which PIH works.