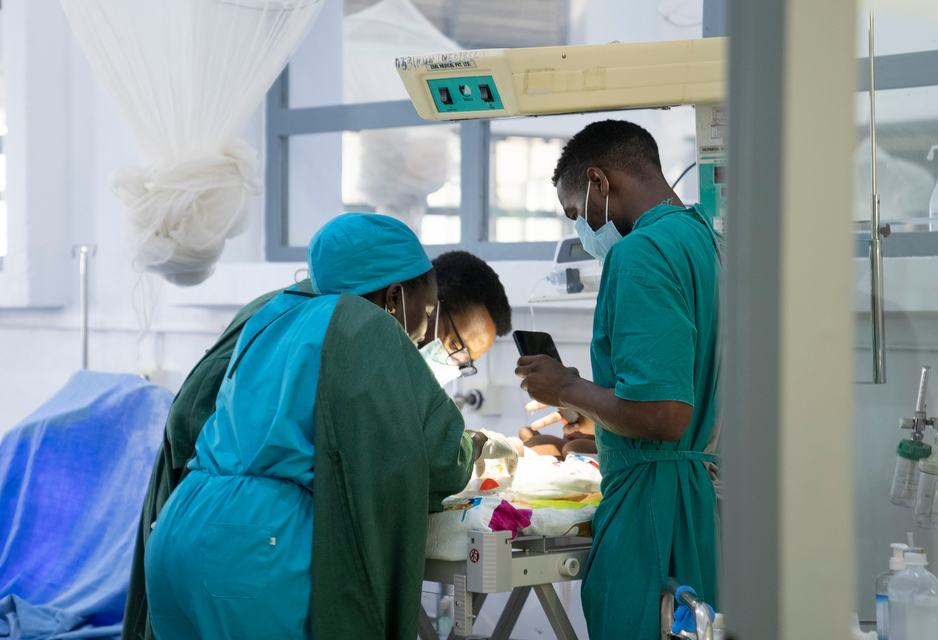 Unit will provide care for the most at-risk infants

Babies born prematurely or with complications in Kirehe, Rwanda now have a higher chance of survival.

Partners In Health recently opened a newly-renovated Neonatal Intensive Care Unit (NICU) at Kirehe District Hospital, in partnership with the Rwandan Ministry of Health. The NICU will provide lifesaving care for newborns in one of Rwanda’s busiest maternity wards.

“The newly renovated NICU will improve the quality of care, help staff to easily identify newborns who need immediate care, and will be a friendly, safe [environment] for the mothers, babies, and staff,” says Dr. Jean Claude Munyemana, the hospital’s director general.

Partners In Health, known locally as Inshuti Mu Buzima, has worked in Rwanda since 2005 and in Kirehe since 2006. Inshuti Mu Buzima partnered with the Ministry of Health to build the district hospital in 2007, as part of its mission to strengthen the public health system.

Kirehe is a district in Rwanda’s Eastern Province, known as the country’s breadbasket for its large-scale commercial agriculture. But with a population of nearly 450,000 served by one hospital, the demand for health care is high.

NICUs are crucial resources for newborn care, providing oxygen therapy and other lifesaving services for babies born prematurely or with complications. But mothers in Rwanda’s rural communities rarely have access to a high-quality NICU, even though the under-5 mortality rate is higher in the country’s rural areas compared to urban areas.

Newborn care at Kirehe District Hospital began with one incubator and four beds in 2009, using space in the pediatric ward. The hospital has had a NICU since 2015. The NICU cares for as many as 160 newborns each month and, along with the hospital, serves thousands of patients, including from Rwanda’s largest refugee camp, Mahama.

But before the renovations, that care came with many challenges. Bed occupancy was at 85-160%, even as demand grew year-over-year. Equipment was outdated. And there were only four wards, structured in a way that complicated care delivery and infection prevention and control.

The renovation comes as a massive step in the right direction.

Now, the NICU has five wards for at-risk infants and a total of 40 beds. The renovations also include a resting room for mothers whose babies are incubated, a “breastfeeding expression room” where mothers can breastfeed in privacy and receive training from Inshuti Mu Buzima’s “expert mothers,” and separate entrances for patients and hospital staff, expediting care and allowing an ambulance to access the unit quickly.

“As a clinician and also a mother, with the new space we have, I feel more comfortable staying in the NICU,” says Dr. Angelique Charlie Karambizi, a pediatrician with Inshuti Mu Buzima.

Even after the renovation, needs remain. The NICU needs more equipment, including five more incubators, an onsite biomedical engineer, and an upgraded laboratory.

But the newly-renovated NICU will provide lifesaving care for the youngest, most at-risk infants in Kirehe and beyond. It comes as the latest chapter in PIH’s ongoing work to dismantle longstanding injustices in global health—work that also includes Inshuti Mu Buzima’s cancer care program at Butaro District Hospital and an ongoing partnership with the University of Global Health Equity, founded by PIH in 2014 to train African doctors and nurses and shift the center of gravity in global health toward the Global South.

The NICU renovations also come as part of PIH’s decades-long partnerships with ministries of health in the countries where it works, strengthening public health systems to promote health care as a human right.

“We work towards a world where newborns and mothers not only survive, but thrive,” says Dr. Erick Baganizi, director of maternal, neonatal, child, and adolescent health at Inshuti Mu Buzima. “This will be a center of excellence for neonatal care.”

In Eastern Rwanda, a new mother gives birth to twins, four days apart. For those four days, medical teams monitored the health of the newborn day and night in the neonatal intensive care unit to give her a fighting chance, while also caring for the mother to prevent any infection.